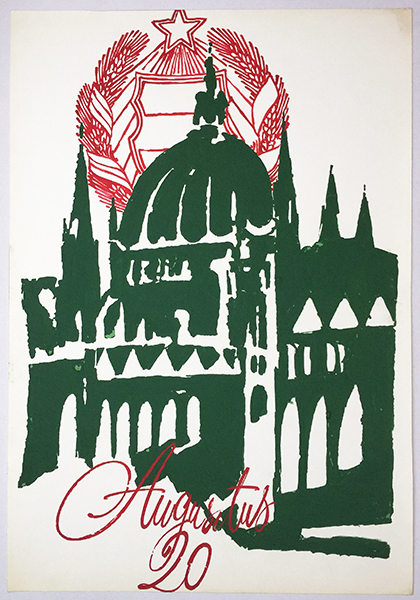 This painted poster artwork was created by Antal Gunda, a fine poster designer, for a national anniversary in the 1960s and it is connected to interesting political-historical issues.

Antal Gunda created several poster artworks for state celebrations and anniversaries. This work was created for the 20th of August which is the national and state celebration of Hungary. It is also the anniversary of the canonization of the first Hungarian king, I. Stephen, but during the Socialist era, between 1949 and 1989, it was replaced by the anniversary of the new constitution that the first political leadership of the period created.

The poster is a skillful and decorative composition of the red sign of ‘20th of August’, the green Hungarian Parliament and the red Hungarian coat of arms of the Kádár-era in front of a white background, referring to the national colours. The expressive portrayal of the image and the delicate lines of the script also contributes to the decorativeness of the poster. Even the coat of arms in the background, the political symbol of the era which wasn’t a beloved part of compositions those times, can function well visually. It also reveals Gunda’s talent that the political propagandistic character is not didactic, political issues doesn’t ruin the whole image, although the function of the political symbol is obvious. Even if the coat of arms represents the curent political ruining power, the most highlighted element of the composition is still the Hungarian Parliament, representing not only the state, but the Hungarian nation, too.

The Hungarian Parliament dates back to the end of the 19th century. There was a public tender in 1881 to find the perfect architectural design, and Imre Steindl, one of the greatest Hungarian architects of his time, was the winner with his plan. The final edifice was built until 1905 and it became the third largest Parliament building in the world, and the secong largest one in Europe. The building is located in Budapest, the capital city of Hungary, along the river Danube. Because of its location, it also became a symbol of Budapest, just as the British Parliament became symbol of London. Due to the stressed presentation of the emblematic building of the Hungarian Parliament, the poster could also function as a tourism poster of its time.

This poster artwork is a mature and decoratively painted piece from the 1960s, created by an outstanding poster artist, relating to complex issues of Hungarian history.