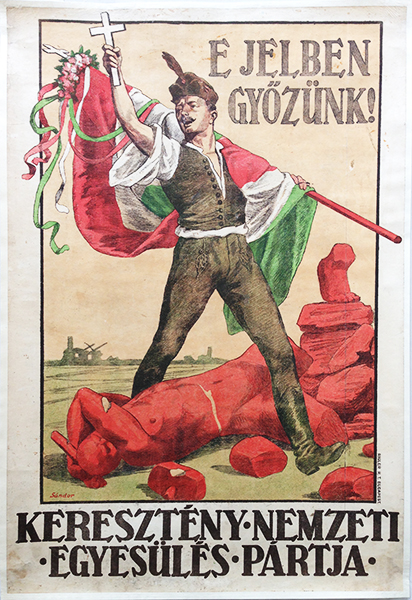 We Will Win in This Sign! Christian National Unions' Party

This poster was featured in the 1920 December issue of Das Plakat.

The ‘Keresztény Nemzeti Egyesülés Párt’, in short KNEP (Christian National Union Party) was established by István Friedrich in October 1919, and was based on the pre-war Christian Party. In the parliamentary elections of 1920, the Christian Nationals won 82 seats in January, finishing second behind the National Smallholders and Agricultural Labourers Party. The KNEP formed a coalition government with the Smallholders on 15 March. The party quickly began to fragment, and by the spring of 1921 it had lost much of its strength, though. The 1922 elections saw the party reduced to just 10 seats. KNEP did not contest any further elections, and it was disbanded in 1926.

This poster was probably created for the 1920 elections. It is clearly articulated on the poster that the party defined itself against the communists. A male figure is depicted as a hero in the centre of the composition, carrying the national flag with a cross, flowers and ribbons in the end. He is raising a cross in his hand, too. This is the sign in which "We will win!". This motto is a reference to Constantine the Great: the legend recounts that in the Battle of the Milvian Bridge Constantine and his soldiers had a vision of the Christian God promising victory if they daubed the sign of the Chi-Rho, the first two letters of Christ's name in Greek, on their shields.

The symbols the figure holds represent the main ideological values of the party: nationality and christianity. The appearance of the figure also makes it clear that this is a national figure, as he is wearing old-fashioned folk costume and hat, and he is depicted with a mustache which was also characteristic of Hungarians in the time. He is stepping over a sculpture, made of red stone, lying broken on the ground. This is another symbolic figure which can be familiar from Hungarian red propaganda posters: the Red-hammer-wielding-man. The figure was originally created by Mihály Biró, later it was the symbol of the Social Democratic Party since 1912, and in 1919 it became an official symbol during the Hungarian Soviet Republic’s short period. The figure represented the strength and power of the working class. In the early 1920s, when this poster was created, the Soviet regime was blamed for every harm - for losing World War I, for the immense territory losses, for the consquences of the Trianon Peace Treaty, etc. As the poster captured the typical national figure (which represents the Christian National Union's Party) stepping over the Red-hammer-wielding-man enthusiastically, it suggested that a new era had begun, and the old one would be completely demolished and erased.

The Christian National Union's Party clearly had the intention to wipe out with the ideology of the former era, namely the Hungarian Soviet Republic of 1919. The old fashioned style, the religious and national symbols clearly demonstrate the party’s conservative-nationalist political ideas. Although this propaganda poster probably gained success for the party to win the elections, the Christian National Union Party couldn't keep its power for long.