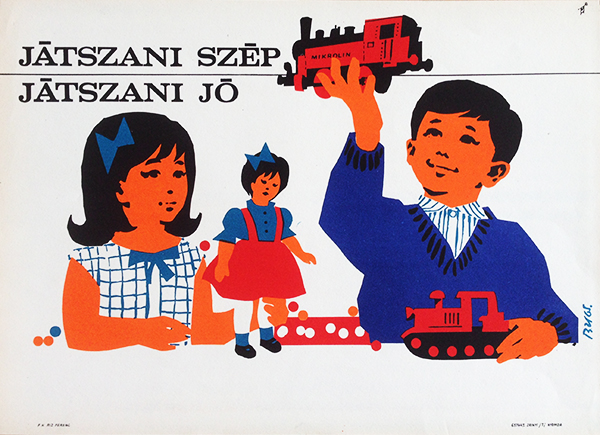 It's Nice to Play, It's Good to Play

Double tram poster for toy promotion. It is hard to tell if this poster was a propaganda or a commercial poster but probably both. In the Socialist times many commercial posters could be considered propaganda posters because most companies were state owned. On this poster only one brand name - Mikrolin - is apparent but it is very small. It is on the train engine held by the boy, but the slogen in the top left corner is much more dominant: 'It's nice to play, it's good to play'. Hence it is not obvious that this poster was made to promote the importance of playing or to promote the brand Mikrolin.

After the Second World War toys were made in smaller manufactories from spare wooden material which couldn't be utilized in carpenter workshops. From 1948 this production was taken over by the industrial cooperatives as a result of the nationalization. By 1953 toys were mass produced in Hungary. In 1952 a toy supervising commettee was established and all toys designed and produced in Hungary went through the censorship of this committee. All toys had to be designed in one office supervised by the government. Displaying a certain brand on a poster or just simply calling the attention for buying toys meant basically the same thing since all toys people could buy were produced by state owned companies. It was the case with Mikrolin as well, which was producing toy-railways.

On the poster there is a boy and the girl. The boy is holding the classic toys for boys - the above mentioned Mikrolin toy-railway and a tank, while the girl is playing with a doll. Both of them are very happy and satisfied with what they have. This is a typical socialist portrayal that always shows how happy the people are and that happiness is caused by the government. The cartoon-like style of the composition was commonly applied in the sixties. it is very decorative thanks to the harmony of its colours and the small details, such as the girl and her doll are wearing the same bow.