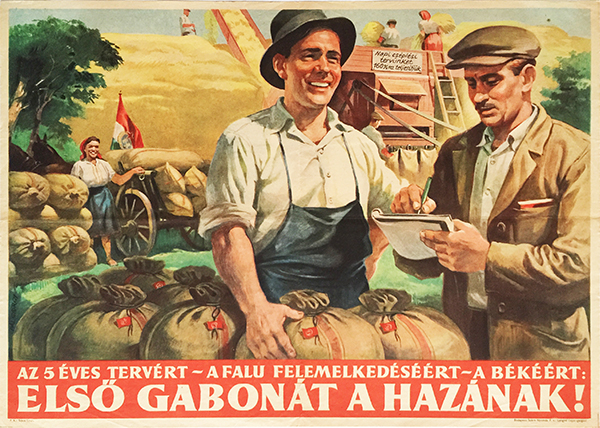 For the 5 year plan - For the rise of the village - For peace: The first grain harvest to the Homeland!

Propaganda poster for popularizing the Five-Year Plan. The inscription on the thresher says the following: We complete 160% of our daily threshing plan.

After the Second World War the socialist government in Hungary had seven five-year plans within 20 years (besides a one-year and a three-year plan). The first five-year plan was amended in 1953, the year when this poster was designed. These plans were all made with the goal of economic growth but it's needless to say that the forced industrialization - which was the main focus of most of these plans - caused more damages to the economy than good. As all socialist-realist posters, this one also shows very happy characters. Everyone is smiling, everyone is happy with the new economy system brought by socialism. The first action of the socialist economy was the nationalization of all industries, all productions were placed in state ownership and radical alternations had been issued throughout the decades. In the 1950s the focus was on the centralization and redistribution of the goods produced. In the agricultural sector this manifested in the collectivization of the goods which meant the elimination of private farms and the lands of the peasants were incorporated in collectives, that  is, state owned cooperatives. Many peasants had to find a new form of living thus the agriculture went through a serious decay due to the lack of resources (both in terms of labour force and tools). In 1953 the New Course was announced by the new Prime Minister, Imre Nagy, as a remedy for the losses caused by the former provisions. The new provisions included that compulsory delivery quota wasn't applied to all products. The compulsory delivery means that farmers had to hand over the goods produced by them to the state on a very low price and peasants were obliged to hand in a certain amount of goods determined by the state. If they couldn't live up to it, they had to pay a penalty which very often lead to the peasant going bankrupt. However, after the New Course, the compulsory delivery was issued on less products, but grain had to be handed in.

This propaganda poster from the year of the New Course tells that the first grain harvest has to be handed in to the Homeland. To strenghten the positivity of the message the text at the bottom explains that this obligation is for the good cause: for the five-year plan, for the rise of the village and for peace. Handing the harvested grain to the State is for the good of the Homeland. In order to ease the anxiety of the farmers about being able to achieve the quota, the thext at the back tells that these peasants completed 160% of their daily trashing plan making them feel that the quota is not unattainable, on the contrary: it can be topped even by 60%. The happy faces of the characters suggest that they didn't even had to work inhumanly hard. The design bears the characteristics of the typical (and obligatory) style of the socialt-realist manner: smiling workers, symbols of the socialist regime (red star, falg with the new coat of arms of Hungary).The artist, György Pál, designed numerous propaganda posters and the majority of his works follow the socialist-realist regulations. These pieces today are interesting and unique historical relics.