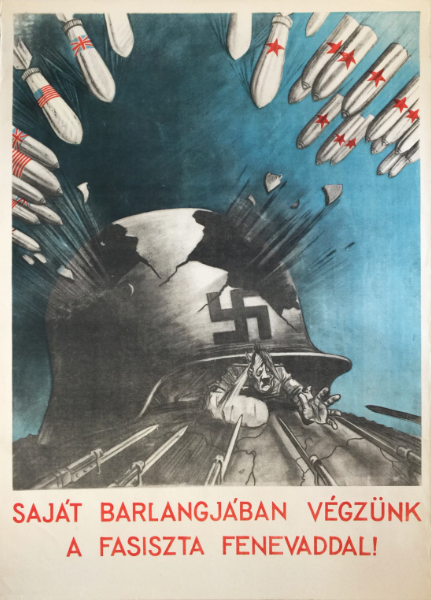 We'll finish the fascist beast in its own cave

Fine, creasing and small tears along the borders.

In the fall of 1944 Red Army troops entered the German-allied Hungary. On the 5th of November they reached Budapest and following Stalin’s order they started to besiege it. The city was of key importance for Hitler who felt that Vienna was safe as long as the Hungarian capital was under German influence, as the German ambassador’s statement made it clear: “We don’t care if Budapest falls 10 times, if we can keep Vienna with that.” The fight lasted 51 days and numerous victims have fallen on both sides and the many parts of the city have been destroyed. After the fall of Pest the Germans exploded all the Danube bridges. On the 13th of February the Red Army captured Buda as well and the extreme rightist “Arrow Cross” government fled, leaving thousands of dead victims in and outside of the ghetto in Budapest.

Sandor Ek’s anti-fascist poster appeared on the streets of Budapest after the siege. The population of the city experienced the sudden change: shortly after the Germans’ “resistance until the last breath” propaganda, the Russians have begun their socialist, antifascist campaign.

The designer of the poster, Sandor Ek, has returned to his homeland as a fighter of the liberating Red Army. His name was originally Leicht and he chose Ék and its German version, Keil (~wedge) as a movement name. Growing up in a suburb of Pest (Angyalföld) as a poor working class child, he engaged in the socialist ideology from a very early age and by the time he was 16, he entered the Hungarian Communist Party (KMP). In 1919 the seventeen-year old boy happily greeted the Hungarian Soviet Republic, which existed 133 days. He drew political caricatures for papers and, after being a member of the Red Army for a short time, he studied arts in the school of Béla Uitz and József Nemes-Lampérth (important Hungarian painters of that age). After the fall of the Hungarian Soviet Republic he immigrated to Vienna. In 1921 he participated in the “Young Worker’s International” in Moscow (where he met Lenin personally) and studied in VHUTEMASZ from El Lissitzky  for several months. During these times he was painting in modern and constructivist style, which he gave up soon for the obligatory socialist realism. He has also visited Berlin and Paris and later returned to Budapest, where he has been arrested. After 1925 he lived in Germany and worked for the “Rote Fahne”, “Arbeiter Illustrierte Zeitung” and for other leftist newspapers. Here he made a name for himself as a designer of leftist propaganda posters, similarly to John Heartfield’s antifascist designs. Because of Hitler’s rise he left for the Soviet Union in 1933, where he won a poster competition organised for the anniversary of Lenin’s death. In 1944 he joined the Soviet Red Army.

Ek was an enthusiastic photographer as well and a lot of his pictures remained in the Hungarian National Museum and other collections. He has documented on several photos the horror of the war and the fascist era. He took pictures about the exhumations in Budapest, as the German and Hungarian extreme rightist (Arrow Cross) troops had Jews and other citizens who were considered enemies, shortly before the Soviets captured Budapest. Ek’s pictures are shocking documents of these massacres.

After the fall of Budapest three antifascist posters of Ek covered the walls of the city. They all predicted the fall of Hitler’s Nazi power with their titles: “We finish the Beast in its own cave”, “The Nazi Germany will fall shortly – under the blows of the Allies, that is what the Krim Conference decided” and “The fascist beast shall not escape!”. All the three represent Hitler under the attack of the allied forces. All of them are very aggressive, bloody and brutal and they make clear that there will be no mercy for the Nazis. These posters use two main elements, raw and aggressive propaganda, and humorous caricaturistic elements.

As the Highest Commander of the Red Army, Stalin published several speeches and orders which were probably not just told, but they were also printed as text posters in army camps. On the 27th of April – during the battle for Berlin– he was talking to the soldiers and marines of the Red Army and to the workers of the Soviet Union:

“The days of Hitler’s Germany are over. More than the half of its area is occupied by the Red Army and its allies. (...) The deadly wounded fascist beast wriggles for the last time. The task is to finish the fascist beast”. On the 2nd of May Berlin fell and on the 8th Germany capitulated. One day later Stalin spoke to his comrades about the great victory over the Nazi Germany and in the speech he mentioned “the wolf-like nature of the German leaders.”

Ek, as a soldier of the Red Army, was definitely familiar with Stalin’s speeches. He clearly used Stalin’s words in his propaganda posters and he represented Stalin’s view on the enemy.

The composition is obviously an illustration of the soviet verbal propaganda, which makes clear that it followed the German capitulation. However, the fact of the victory had to be emphasized and the fight against the fascism was still going on: the sinners had to be found and punished.

Sandor Ek’s loyalty to the communist power lasted until his death. His works always followed the obligatory manner: the socialist realism. He chose the suggested themes for his paintings: workers, peasants, Lenin and Stalin, and the liberating Red Army was often represented in his oeuvre. Art was a movement-like act for Ék. He saw only one goal for his art: to help the rise of the working class. His works and his life are documents of his strong belief in the socialism. He wrote in 1947 about his fate:

“As a young worker the terror of the counter-revolution chased me out from my homeland. Back then I only had the desire to become an artist one day. After 28 years of exile I had to change the paintbrush to a weapon to see my homeland again. I came home not as an artist, but as a soldier of the Red Army, which was fighting against fascism. I was fighting together with sons and daughters of the nation that gave home to everyone chased by the fascists. (...) It has been a strange play of destiny that my career has started at the very same place, from where the bloodiest fascist terror had spread all over the world, and later, back at home, I went public with the genre, with which my career has started in Germany: the political poster and caricature.”