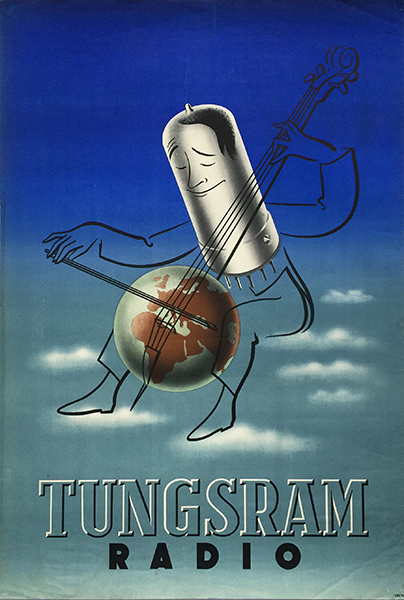 Tungsram was established in 1896. The company was awarded a patent for electric bulbs with a tungsten filament in 1903. Later in 1934, they also announced a patent for Imre Bródy's electric bulb filled with krypton. Both provided a longer lifetime for electric bulbs. The firm produced telephone apparatuses, wires, and telephone switchboards since the establishment of the company. Since World War I., the mass production of radio tubes began, which became the most profitable branch of the company.The name Tungsram is a portmanteau of "tungsten" and "wolfram"  (as tungsten, the metal used for making the filaments, is known in Hungarian, German and many other languages). British Tungsram Radio Works was subsidiary of the Hungarian Tungsram in pre-war days. (source: wikipedia.org). Tungsram sold most of its products abroad, although after the Second World War it had been nationalized, but its subsidiaries in the Western countries remained.

The author of the poster is Tihamér Csemiczky who was a student of Sándor Bortnyik. Bortnyik put a great influence on Csemizky what is well visible on his moderninst style. Csemiczky was a real multi-talent interested in graphic design, photography, art history as well as in natural sciences. By 1930 he was the graphic designer for radio manufacturing companies (Orion, Telefunken, Standard) and he defined the main image of Tungsram until 1958. His poster designs from the 1920s were clear, concise and puritan in accordance with the modernist manner. Later, in the 1950s his style became more colourful and soft as well as humour appeared on his compositions. In the 1950s he designed many Tungsram posters for abroad. This particular piece  is one example of those, and it is a very interesting document of the Hungarian art scene of the era. From 1949 until 1956 Hungarian artist had to follow the obligatory socialist-realist style. This constraint was hell for most of the very talented artists of the time, as they did not get a chance to express their personal artistic tone. However, there were some companies who exported products and these products needed advertisments. In order to show other countries how good the life and economy was in Hungary at the time, the designers of the export posters were free to let their imagination go and create pieces with a real artistic value. Moreover, the final versions were printed on the best quality paper, unlike the posters for the local market.

This poster by Tihamér Csemiczky is a  beautiful and very decorative export poster. The composition is completely different from the obligatory socialist-realist style in Hungary at the time. The socialist-realist posters depict happy workers, socialist symbols, flourishing economy, in a monumental, realistic manner. Contrarily, this piece has a dream-like humorous character, with soft colours and shapes. The composition shows a musician whose upper body is a radio tube which was one of the leading product of the company, and the basic element of radio broadcasting. His instrument is a cello of which the body is the globe. The character is drawn with a simple black line what defines the dynamics of the image. The cellist is elevated from the ground: he is depicted playing in the blue sky in front of white clouds. Below him the name of the brand is written with modernist typography. The complex message of the poster is very well expressed by the composition containing just a few elements: Tungsram produces radios and radio parts for the global market. Thanks to this, radio broadcast is available worldwide, hence people can listen to music. As a result of listening to music, people  will live a less stressful life, will be carefree and will feel uplifted just like the character on the advertisment.