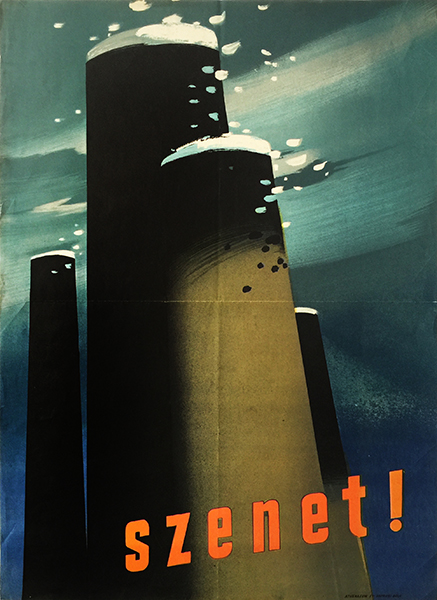 Give us coal! is scarce propaganda poster from the days of the 1956 Hungarian revolution.

The revolution started on the 23rd of October and ended on the 10th of November. This was the very first significant threat against the Soviet regime since they occupied the country in 1945. The uprising started with a student demonstration and quickly spread. The Hungarian people had enough of the communist dictatorship that forced unreasonable industrialization on the country, unattainable economical goals and tried to achieve its political objectives by the means of terror. The revolution was preceded by a serious economic crisis, however, people didn’t know about that from the news as media was under strong censorship and the news were centrally controlled. The all time communication of the regime was about assuring the public that the country was prospering and performing better and better each year. The uprising was a clear sign of the critical condition of the economy, it was in such a bad state that even the general public sensed it in the quality of their life.

Mining towns and miners played a major role in the revolution. In the 1950s Hungary’s most important energy source was coal, hence the fact that miners were on strike, organized demonstrations and addressed the government with their own demands gave grounds to major concerns. There was a serious shortage of coal even prior to the revolution and the situation quickly worsened after the miners refused to work. On the 4th of November, the Soviet troops invaded the country and the suppression of the uprising begun. Soon propaganda posters, leaflets and other material appeared on the streets, calling miners to start working and give coal, but the miners didn’t end the strike. They handed in their demands to the government, whereas more and more propaganda material was published with mothers and their child begging for coal, schoolkids saying that they’re cold, and couldn’t study. In December the government raised the miner’s salary, and the situation soon consolidated, however, retaliations of those who were taking part in the revolution did continue taking place for a long time after the revolution.

This poster is one of the rare relics that remained from the time of the long miner strike. The painted composition is simple, easy to understand, yet very decorative. Smoke clearly hasn’t come from the secluded factory chimneys for a long time, intact snow is covering it. The smokestacks are pictured from below and the perspective makes them look giant. The feeling of a windy weather evoked by the way the snowflakes are pictured and the determinate brushwork of the background, the dark blue sky, the cold and desolate factory creates a sullen atmosphere. The diagonal arrangement of the chimneys and the text recalls the modernist way of constructing compositions, although the visible brushstrokes, the delicate shades and the dark colours differ from the constructive compositions of the 1920s and ‘30s. The image carries a complex message, while the text is just one single word ‘szenet!’ (coal!). The typography is clean and simple what makes it even stronger as well as the bright colour in contrast with the rest of the composition.