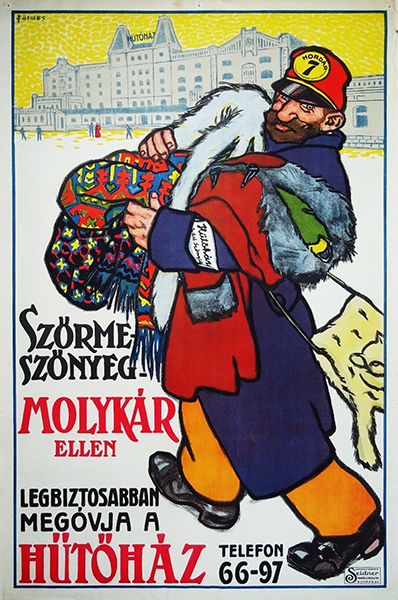 Store your furs and carpets at the Cold Store

Near mint, pinholes and a small stain, backed on thin linen.

The poster was created approximately two decades after the inception of Hungarian poster art, when it was already an accepted and popular art form, but still had a variety of manners and techniques to explore. This situation entailed countless possibilities and prompted artists to experiment, what evidently gave birth to amazing posters.

In the 1910th, the time of this piece, the humorous and grotesque commercial posters, such as this one, were very popular. It also demonstrates the criteria what Mihály Biró (another great poster artists) framed as the characteristics of a good poster: 'the clue is an eye-catching, smart drawing with matching and striking colours what catches attention then makes the eye wander further to the text. The usage of a great variety of colours is not reasonable, as printing with less colour is cheaper and the composition is also more effective.' Although Földes's poster is bright and colourful, if examined carefully, it becomes clear that he only used different shades of three colours: blue, red and yellow.

The poster promotes the Cold Store where fur and carpet is safe from damage caused by moth. The artist depicted the carrier as he is taking the goods to the Cold Store. The focus of the viewer is directed to the large figure of the carrier and the colourful pile of fabric he is holding, by placing them in front of a light coloured background that looks like a draft. Then, just like in Biró's description, the attention is drawn to the text written with bold red and black letters: 'Cold Store: protects fur and carpet from moth'. The artist's exceptional talent is manifested in small details, such as the perfect rhythm of the alternation of detailed and stylized elements: the pattern of the carpets and furs are clearly visible, or the red coat's collar's texture is depicted in a more complex way compared to the main figure's clothing that consists of colour blocks with thick contours without any shades or indication of wrinkles. However, the reflection of light on his polished boots and the shade of his hat is well visible and painting like, just like his face. To make the character's role unambiguous the distinct text on his armband indicates that he is the employee of the Cold Store, and his hat reveals that he is carrier number 7. The background's yellow brush strokes resemble Van Gogh's style.