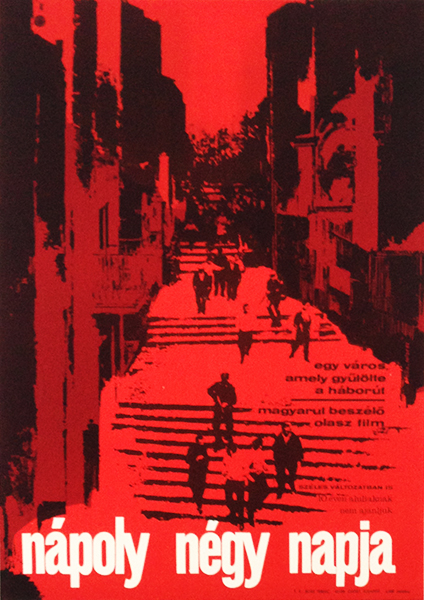 Four Days Of Naples, The

The Four Days of Naples (Italian: Le Quattro giornate di Napoli) is a 1962 Italian film, directed by Nanni Loy and set during the uprising which gives its name. It stars Regina Bianchi, Aldo Giuffrè, Lea Massari, Jean Sorel, Franco Sportelli, Charles Belmont, Gian Maria Volonté and Frank Wolff. The film won the Nastro d'Argento for Best Director, and was nominated for an Academy Award for Best Foreign Language Film and Writing Original Screenplay, and a BAFTA Award for Best Film. At the 3rd Moscow International Film Festival in 1963, the film was awarded with the FIPRESCI Prize. The film shows the history of the Neapolitan popular revolt against the invading Germans, during the second world war. During the four days in Naples the revolt turns over in just few hours. Neapolitans slinged on rifles and guns, and they armed themselves with stones, house-objects, gasoline-bottles and everything, anonymous and silent. Gennarino Capuozzo, a ten year old child killed on a barricade while he was fighting against the invasors, is remembered by people as a hero. (source: wikipedia.org, imdb.com)