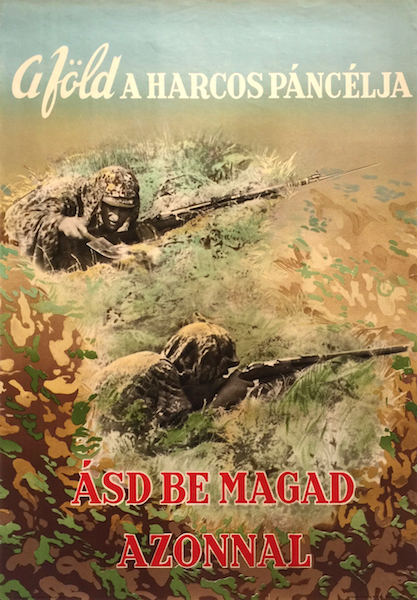 Land is the warrior's armour - Dig yourself in immediately

Interesting military poster from 1949. It adviced soldiers to dig themselves in as soon as possible.

The poster was created in the beginning of the Socialist regime in Hungary in the 20th century. The election in 1949 was the starting point of a new, dictatorial era. In the same year, a new constitution was written, which provided a strong basis for the communist regime. The power of the working class was supposed to be represented by the strong dictatorship of the Hungarian Workers’ Party, and its leader, Mátyás Rákosi. Meanwhile, the country was under the occupation of the Russian red army which took every aspect of the life of Hungarians under its control. These were the darkest years of communism, when the economy went thorugh a disastrous downfall and human rights were trampled. The period of this forceful dictatorship was ended by the revolution of 1956. Although the uprising did not manage to totally strike down the communist leadership, the system slowly started to get softer.

The brainwashing of society was of key importance; only the Marxist-Leninist ideology was approved. This strong control defined the poster design and the world of art as well. Socialist realism, developed in the Soviet Union, became the obligatory style. The posters were always painted, and all the paintings were made in exactly the same heroic manner, thus the paintings and posters looked alike. Photo-like realistic human figures appeared on the posters which were mainly idealized typical characters, for instance smiling workers, proud peasants, or responsible, dutiful soldiers.

This design also aimed to provide a realistic representation of fighting soldiers. They already dug themselves into the soil, showing the proper behaviour to be followed. They appear in black and white, while the surroundings are colourful. These greyish, terrene colours and the use of a simple composition were especially characteristic in case of socialist realist posters. The visual design was subordinated by the content: the messages, which were mostly didactic, propagandistically explanatory or imperatival, were the most important parts of these pieces.