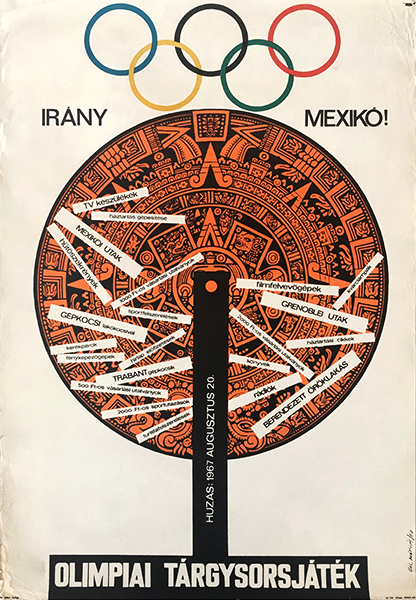 Fine, creasing and smaller tears along the border.

The poster advertises the possible prizes of the Olympic Raffle. The first prize is on the top of the fortune wheel: a trip to the 1968 Summer Olympics held in Mexico City.

The 1968 Summer Olympics, officially known as the Games of the XIX Olympiad, were an international multi-sport event held in Mexico City, Mexico, in October 1968. These were the first Olympic Games to be staged in Latin America and the first to be staged in a Spanish-speaking country. They were also the third Games to be held in autumn, after the 1956 Games in Melbourne and the 1964 Games in Tokyo. The Mexican Student Movement of 1968 happened concurrently and the Olympic Games were correlated to the government's repression.