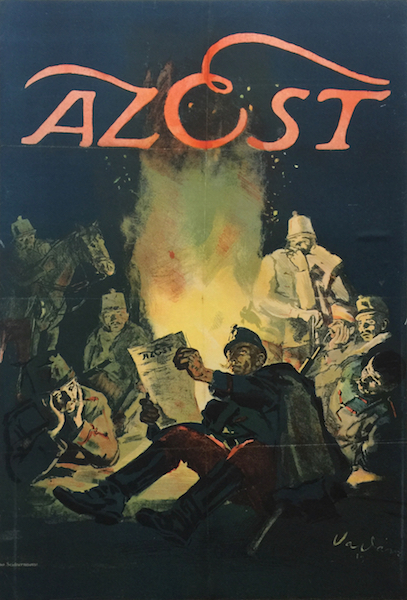 This one sheet commercial poster advertises  Az Est (The Night), an important Hungarian newspaper and publishing house at the time. The composition, which was made in the first period of World War I, romanticizes the war. The design has been reproduced numerous times.

The paper was established by Jozsef Surányi and became the most popular journals of the next nearly three decades. It was not only important due to the incredible logistics involved during distribution, but the inception of selling papers on the boulvards, the avoidance of traditional journalist schemes and the popularization of a new style is also related to it. It was innovative in terms of content and form with a bold and modern tone while it remained free from politics. It was successful with targeting a wide audience with its short, one column lead articles and managed to contribute to the formation of people's attitude.

One of the major strengths of the paper was the reliable news supply thanks to its skilled journalists and reporters. Besides important columnists of the time, popular authors published in the paper such as for example Ferenc Molnar, Sandor Brody, Jeno Heltai or Zsigmond Moricz. The typography and the title of the magazine was designed by Elek Falusi an applied artist and set designer. The posters advertising the journal were designed by great artists such as Tibor Polya, Lipot Herman or Miklos Vadasz, the author of this particular piece.

The magazine proved to be very successful producing an always increasing number of sales. During World War I. the foreign press referred to Az Est most often as a source, and the paper reached half a million copies during the war. However, it was banned along with numerous other papers during the time of the Hungarian Soviet Republic in 1919 and it was published again after the fall of the era and was published until 1944.