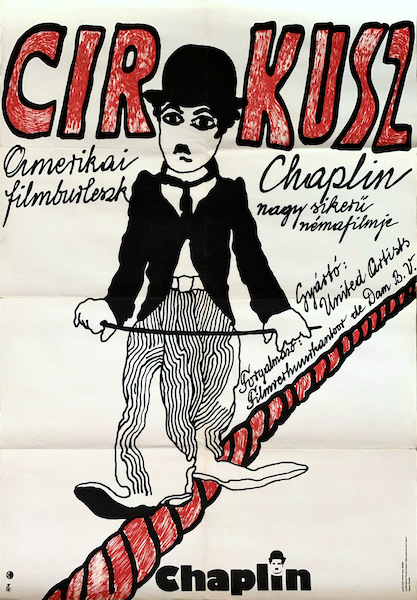 The Circus is a 1976 vintage Hungarian re-release movie poster designed by Kalman Szekely.

The Circus is a 1928 silent film written and directed by Charlie Chaplin. The film stars Chaplin, Al Ernest Garcia, Merna Kennedy, Harry Crocker, George Davis and Henry Bergman. The ringmaster of an impoverished circus hires Chaplin's Little Tramp as a clown, but discovers that he can only be funny unintentionally.

The production of the film was the most difficult experience in Chaplin's career. Numerous problems and delays occurred, including a studio fire, the death of Chaplin's mother, as well as Chaplin's bitter divorce from his second wife Lita Grey, and the Internal Revenue Service's claims of Chaplin's owed back taxes, all of which culminated in filming being stalled for eight months. The Circus was the seventh highest grossing silent film in cinema history taking in more than $3.8 million in 1928. The film continues to receive high praise. (source: wikipedia.org)

The Tramp finds work and the girl of his dreams at a circus.