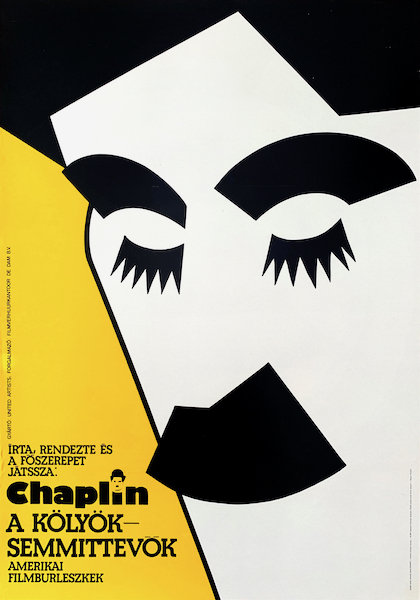 Chaplin: The Kid & The Idle Class

Chaplin: The Kid & The Idle Class is a 1976 vintage Hungarian movie poster designed by Gyorgy Kemeny.

The Kid is a 1921 American silent comedy-drama film written, produced, directed and starring Charlie Chaplin, and features Jackie Coogan as his foundling baby, adopted son and sidekick. This was Chaplin's first full-length film as a director (he had been a co-star in 1914's Tillie's Punctured Romance). It was a huge success, and was the second-highest-grossing film in 1921, behind The Four Horsemen of the Apocalypse. In 2011, The Kid was selected for preservation in the United States National Film Registry by the Library of Congress as being "culturally, historically, or aesthetically significant." Innovative in its combination of comedic and dramatic elements, The Kid is widely considered one of the greatest films of the silent era.

The Idle Class is a 1921 American silent comedy film written and directed by Charlie Chaplin for First National Pictures. The "Little Tramp" (Charlie Chaplin) heads to a resort for warm weather and golf. At the golf course, the Tramp's theft of balls in play causes one golfer (Mack Swain) to mistakenly attack another (John Rand). Meanwhile, a neglected wife (Edna Purviance) leaves her wealthy husband (also played by Chaplin) until he gives up drinking. When the Tramp is later mistaken for a pickpocket, he crashes a masquerade ball to escape from a policeman. There, he is mistaken for the woman's husband. Eventually, it is all straightened out, and the Tramp is once more on his way.