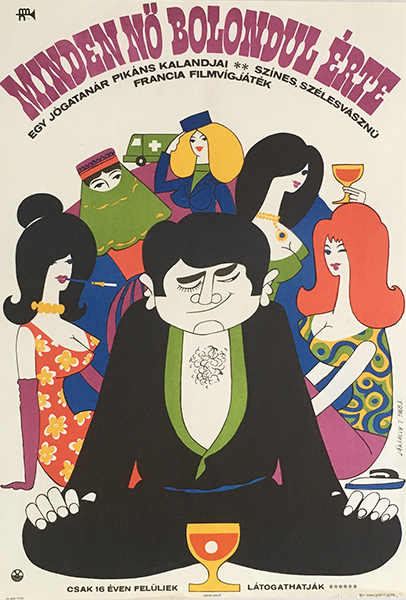 All Mad About Him

All Mad About Him is a 1968 vintage Hungarian movie poster designed by Tibor Jakfalvy.

The literal translation of the Hungarian title is: Every woman is crazy about him.

Toutes folles de lui is a Franco-Italian film directed by Norbert Carbonnaux and released in 1967.

Mathieu Gossin, a naive Parisian librarian and a gentle yoga practitioner, on the death of his aunt Céline, inherited his laundry business (the European Expansion Society). This serves as a cover for an important network of prostitution that Mathieu discovers after his inspections at the "branches" of Rome and Berlin. He is not at the end of his surprises when he learns that Antoine, the father of his fiancée Melina, is somewhat involved in the case. Mathieu will have to make a compromise between "yogi wisdom" and "lucrative charm trade".