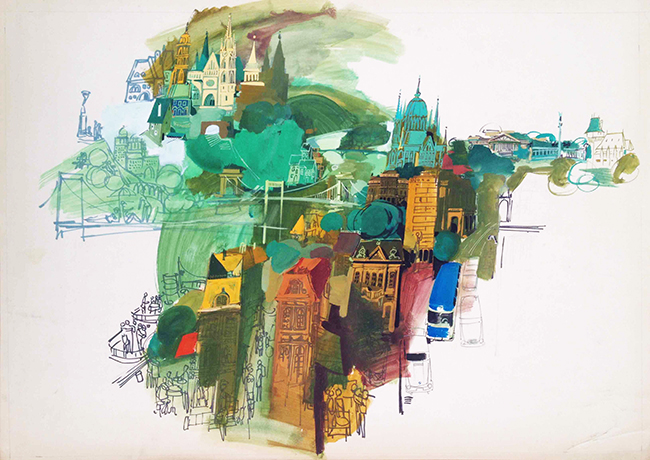 An absolutely outstanding original mid-century modern artwork by Antal Gunda from the 1960s. It shows the Hungarian capital city from a unique perspective.

Antal Gunda was a fine graphic artist and painter, active mostly between the 1950s and the 1970s. He created a great number of posters, mostly film, exhibition, theatre, propaganda and commercial designs. His film and theatre posters reveal his expressive attitude as he often used water colour painting or roughly torn paper cut technique, but an elegant drawing style was also typical of him. This piece makes his picturesque approach the most visible, revealing the fact that originally he studied painting.

It is no coincidence if the viewer of today can be reminded of a moderate kind of abstract expressionism by this artwork. Although the style was specifically based in the USA in the 1940s, later it had important influences in Europe, too, during the post-war times. This work of Gunda can be traced back to these post-war European painting tendencies, for example namely Nicolas de Staël’s abstract landscape painting art, or George Mathieu’s lyrical abstraction. The expressive gestures Gunda applied here and the suddenness in the created atmosphere are similar tones. However, the stained landscape has a significantly local character because of the specific features of the depicted landscape here.  It is also worth mentioning that Neo Art Nouveau or Surnaturalism was much more present in Hungarian painting art during the 1960s, while the expressionist style was characteristic in Hungarian poster art during the second half of the 1950s. In conclusion, this piece was created within an excitingly complex system of international and local styles and influences of the tendencies of the era.

This artwork perfectly shows the refined, decorative style which was Gunda’s own, as it captures Budapest through the eyes of the artist. The composition is concentrated and colourful, containing firm, thin lines and expressive, big colour patches, painted with energetic moves. Shades of green and blue dominate the image, while some yellow, orange and brown shades appear at some spots. The artist employed a homogenous light background to direct gaze at the vital part of the painting. Most of the painted surfaces appear at the centre in contrast to the plain background on the sides, which causes a kind of sudden density in the rhythm of the composition. Maybe this is the reason why the picturesque image immediately catches attention of the viewer who cannot avoid starting to observe thoroughly the mass of details.

The composition makes out a summary of the city’s most famous landmarks. The Matthias Church, the Fisherman’s Bastion, the Castle District, and the Hungarian Liberty Statue on the top of the Buda hills are visible from the Buda side. The Elisabeth Bridge and the Chain Bridge can be seen across the River Danube, while the Hungarian Parliament, the Hungarian Academy of Science, and away the Heroes’ Square, the Museum of Fine Arts and the Vajdahunyad Castle are depicted on the Pest side. Gunda also captured smaller characteristic details of the city such as the typical blue buses of the Budapest Public Transport Company or the people walking down the long shopping street, Váci Street. However, the artwork is more than just a whole of details. With its expressiveness, this piece is an elegant, highly attractive and artistic mid-century work, a result of devoted observation and a creative process. Looking at the painting we can say that Antal Gunda must have loved the city of Budapest.