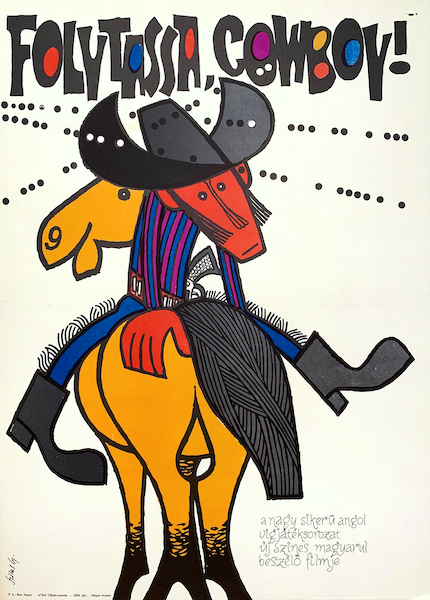 Carry On Cowboy is a 1967 vintage Hungarian movie poster designed by Gyozo Szilas for a British film.

Carry On Cowboy is the eleventh in the series of Carry On films to be made. It was released in 1965, and was the first film to feature series regulars Peter Butterworth and Bernard Bresslaw. Series regulars Sid James, Kenneth Williams, Jim Dale, Charles Hawtrey and Joan Sims all feature, and Angela Douglas makes the first of her four appearances in the series. (source: wikipedia.org)

Stodge City is in the grip of the Rumpo Kid and his gang. Mistaken identity again takes a hand as a "sanitary engineer" (plumber) by the name of Marshal P. Knutt is mistaken for a law marshal! Being the conscientious sort, Marshal tries to help the town get rid of Rumpo, and a showdown is inevitable. Marshal has two aids - revenge-seeking Annie Oakley and his sanitary expertise...