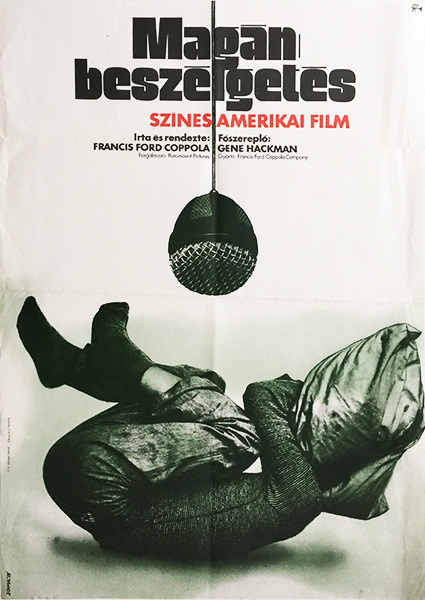 The plot revolves around a surveillance expert and the moral dilemma he faces when his recordings reveal a potential murder. Coppola cited the 1966 film Blowup as a key influence. However, since the film was released to theaters just a few months before Richard Nixon resigned as President, he felt that audiences interpreted the film to be a reaction to the Watergate scandal.

The Conversation won the Palme d'Or at the 1974 Cannes Film Festival. It was nominated for three Academy Awards in 1974 and lost Best Picture to The Godfather Part II, another Francis Ford Coppola film. In 1995, it was selected for preservation in the United States National Film Registry by the Library of Congress as being "culturally, historically, or aesthetically significant"."
(source: wikipedia.org)

The poster is a spectacular black and white piece in a surrealistic manner, created by Karoly Schmal, a fine graphic artist and painter, active since the late 1960s.