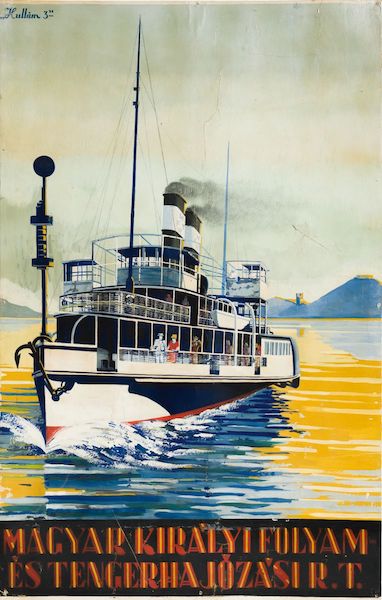 When Gábor Baross was appointed Minister of Trade and Transportation in 1883, and then again in 1886, a new era began in Hungarian transport policy, which entailed favorable changes not just for the railway but also for navigation. The modernization of Hungary's sea port in Fiume (Rijeka) began in this period. The regulation of the Upper Danube resumed in 1886, followed by that of the Iron Gate in 1890. Baross established the Navigation Company of the Hungarian State Railways in 1888 in order to "extend the tracks of MÁV to the water" and to at least partly fulfill the country's public transportation needs on water. This company shipped 166,000 passengers, 1,200 wagons of swine and nearly 2 million tons of bulk cargo in 1893, using 12 steamboats and 40 barges.

Following lengthy negotiations and preparations, Act 36 of 1894 was passed on the establishment and government sponsoring of a Hungarian river and ocean shipping company. The law, which governs the relationship between the new shipping company and the state, as well as the obligations of the company due to Hungarian national interests, the Hungarian River and Sea Shipping Co. (MFTR) held its founding general meeting on January 24, 1895. The founding of the company was sponsored with equity capital of HUF 10 million, half of the amount in shares and the other half in preference bonds, by the Hungarian General Credit Bank and the Hungarian Clearing and Currency Exchange Bank. The 20-year contract the company signed with the government provided it with HUF 400,000 in state subsidies each year. The ships of MÁV were transferred to MFTR, which also gradually acquired the boats of several smaller companies - including the Győr Steamboat Company, established in 1865 - and was also building its own boats at a fast pace, mainly in shipyards in Újpest. The company launched a series of boat lines and soon expanded its activities to the entire Danube and its navigable tributaries, emerging as a serious competitor to market leader DDSG. The boats of MFTR shipped 595,000 passengers and 557,000 tons of goods a year on average in the period between 1895 and 1917. The company owned a fleet of 38 passenger boats, 54 cargo steamboats, 389 barges and two tankers in 1918. The uninterrupted growth of the company slowed down during World War I and was broken entirely following Hungary's defeat. The conditions set in the peace treaties closing the war delivered a serious blow to the shipping companies of the defeated powers, including MFTR. Its newest and best units were confiscated as compensation, and were given to rival shipping companies in Austria and Hungary, thus making competition even harder.

The Danube treaty signed on June 23, 1921 banned ships flying a foreign flag from the river Sava, the Temes (Timiş in Romanian) and the canals of Vojvodina. Only certain sections of the tributaries of the Danube were declared international, with cabotage rights on all other waters requiring the permission of the host country. The seven national borders the Danube crossed at the time, the isolationist economic policy of the successor states of the monarchy and the prolonged slump in demand for agricultural products in Western Europe all had an adverse affect on the conditions of shipping. The situation also deteriorated regarding cabotage in Hungary. The total length of Hungary's river banks shrank after the war, and so did the economic background and the potential passenger base of international shipping. The government subsidy set in the earlier contract between MFTR and the Hungarian state became virtually worthless due to inflation. The company did its best to adopt to the changing conditions. It joined a cooperation initiative between German shipping company DDSG and the South-German Danube Steamboat Company for joint operation of freight lines on the Danube, the mutual use of facilities on the riverbank and for common cargo purchase in 1926. One year later, the alliance was expanded again when Bavarian Loyd Shipping Co. joined. Rationalization efforts, however, proved ineffective in offsetting the effects of the worldwide economic crisis, which began in 1928. The crisis put MFTR in an increasingly dismal financial situation. In 1932, Parliament voted to grant substantial state support to MFTR, realizing that the bankruptcy of the shipping company most suited for the cheap transport of bulk goods would harm national interests. During another reorganization between 1935 and 1936, the shares of MFTR were transferred to the treasury and to state railways MÁV. A comprehensive program for upgrading the company's fleet was launched. Shipping on the Danube saw an upturn again in the middle of the 1930s. Increased demand for cargo shipping necessitated the modernization of the fleet and the investment in motor tugboats. The economic boom also affected the output of the Ganz shipyard. The 1,200 bhp Széchenyi paddle-wheeler tugboat launched in 1938 and the Baross tugboat built in 1939 were the first two dual-powered (diesel and electricity) boats in Europe. Wartime shipping had a favorable effect on the volume of shipping during the early phases of World War II. The boats of MFTR transported 607,000 tons of cargo and 2.353 million passengers a year on average between 1918 and 1944. In 1944, the company had 38 steam-powered passenger boats and 11 motorboats, 32 steam-powered and 18 diesel cargo freighters, 252 barges and 18 tankers.