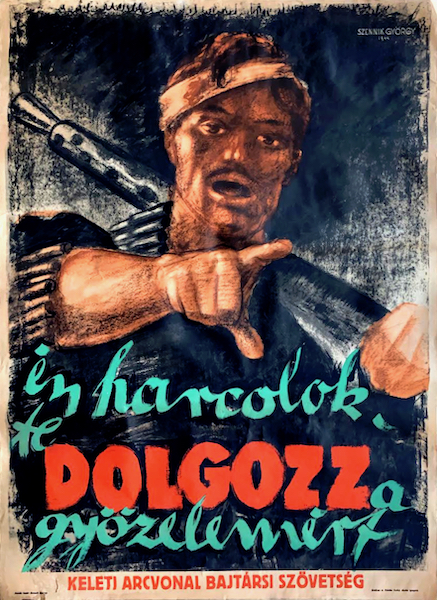 I fight, you must work for victory! - Eastern Front Comradely Association

I fight, you must work for victory! - Eastern Front Comradely Association is a 1944 vintage Hungarian WW2 war propaganda poster designed by Gyorgy Szennik.

Keleti Arcvonal Bajtársi Szövetség (KABSZ - Eastern Front Comradely Association) was an extreme rightist association founded around 1942. Its initial primary goal was to prevent Hungary from quitting World War II. From its inception, until March 1944, the association had been gradually developing a military quality, but was yet illegal. On the 19th of March, 1944 the German troops occupied Hungary, and from that time on, such anti-semite affiliations could more easily gather legal grounds.

In 1944 KABSZ joined Béla Imrédy’s extreme rightist National Socialist Party supported by Berlin. The party adopted numerous fascist habits, such as the Nazi salute, accompanied with saying: ‘a better future’. One of the party’s main programs was to prepare the country for “completely decontaminating it from Jews”. KABSZ was employed as the storm troopers of the party just like in the Italian and German model. Soon, other extreme rightist politicians joined the association and by the end of March it was officially legalized. One key member of the association was Andor Jaross, a leader of the deportations of Hungarian Jews, who partly financed the association from confiscated Jewish wealth.

In August 1944 - despite some debates - KABSZ joined Szálasi’s extreme rightist Arrow Cross Party in order to “efficiently support their mutual goals”. However, KABSZ had to fulfill the Party’s criterion to get rid of Imrédy who had Jewish origins. Under the new leader’s, dr. Károly Ney’s command, the association completely merged with the Arrow Cross party in September, 1944.

According to written sources, KABSZ was preparing for a coup d’etat, however it was circumvented, yet the preparations contributed to the Arrow Cross Party’s takeover in October. By that time numerous members of the association joined the Hungarian SS Division, and soon they formed an official body within Waffen SS, called SS-Kampfgruppe Ney. KABSZ quickly expanded, and by November Waffen SS started to train members for military services, teaching them for example how to use German weapons.

SS-Kampfgruppe Ney participated in various military operations and despite some minor successes, their activity was only approved by the Germans. Szálasi, the Hungarian ‘national leader’ declared their fights illegal and obligated them to join the Ministry of Defense in Kőhalom.

Ney rejected the order, therefore Szálasi denationalized him and other officers of the association. This resulted in KABSZ’s complete disaffiliation from the official Hungarian leadership. As a result, the association acted with even less constraint, often engaging in extremely cruel behaviour. A witness for example remembered that in March, 1945 Ney’s soldiers captured eight parachutists of the Allies, landing close to where Ney’s SS soldiers were stationing. They handed three American soldiers to the Germans and executed the rest of them (out of which four was Catholic, one was Jewish), alongside four Hungarian civilians, whom they believed to be spies. The execution took place in a nearby forest, where the victims had to take all their clothes off before they were shot by a machine gun from a few steps distance.

The association continued fighting during the Soviet siege, however, they never attained substantial military successes. When Ney was informed about the capitulation, he called his troops back. KABSZ was permanently terminated on the 17th of March in 1945 by the Temporary National Government.