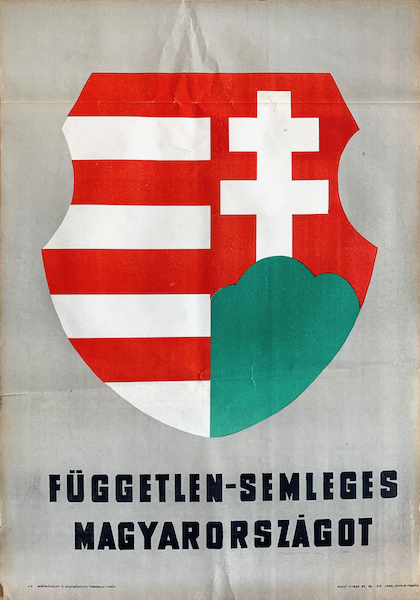 Important poster from the Hungarian Revolution of 1956.

Above the text, there is the Kossuth Coat of Arms. During the Hungarian Revolution of 1848, following the dethroning of the Habsburg dynasty on 14 April 1849, the Holy Crown was removed from the coat of arms. The remaining small coat of arms is usually referred to as the "Kossuth Coat of Arms" (Hungarian: Kossuth-címer) after Lajos Kossuth, Regent-President of Hungary (so unlike the name suggests, it was not the coat of arms of the Kossuth family).

During the 1956 revolution, the "Kossuth" Coat of Arms was used again. In old newsreels, the Kossuth badge can be seen painted onto the turrets of many revolutionary tanks fighting against the Soviet invasion in the streets of Budapest. After the fall of the revolution, the new Communist government did not want to reinstate the unpopular "Rákosi badge", and thus this coat of arms was used for about a year.

The small text in the bottom is publisher and printer information.

The text on the left says:

The text on the right says: