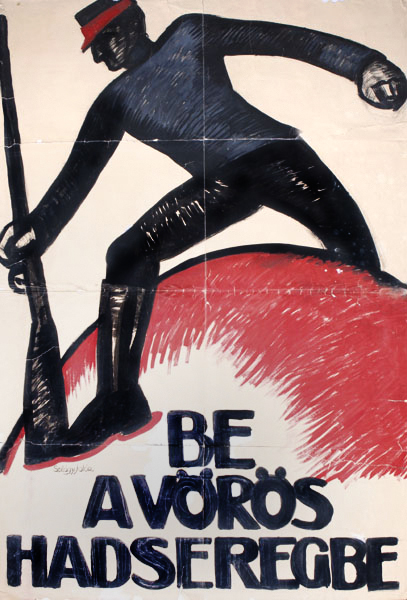 The design was made by Jolán Szilágyi (1895-1971), who was Tibor Samuely's wife. From 1917 she attended the art school of Károly Kernstok and József Rippl-Ronai. Here she come into contact - through the Galilei-kör (Galilei Circle) - with the MA group organized around Lajos Kassák, . In 1918, she founded the union of graphic artists with Mihály Bíró. During the Hungarian Soviet Republic, she was a member of the committee of the People's Commissariat for Education and Culture, judging recruiting poster designs. After the fall of the regime, she moved to Berlin and then emigrated to Moscow. During her stay in Germany she has gained a reputation for her Expressionist graphic works of political content.

A picture of a red soldier crossing the globe, holding a gun dominates this original design. The expressive and dynamic movement of the entire design increases the recruiting and mobilizing power. The powerful composition uses only two colors - red and black -, the colors of the classic Avant-garde, on a white blackground. This is an extremely rare, early original artwork of impressive size and expressive power. It can be compared to the early Russian Soviet propaganda designs.