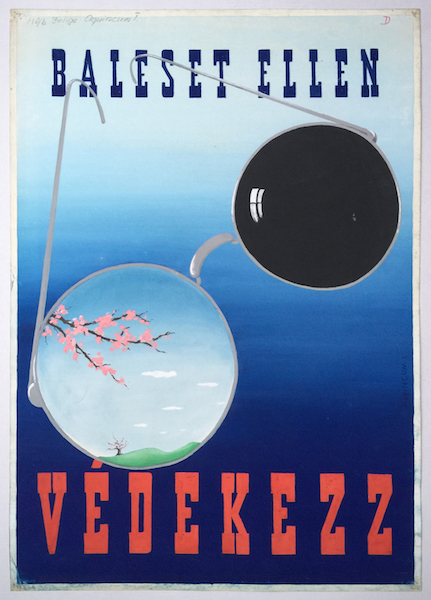 Protect yourself from accidents!

This spectacular painted artwork was created as a safety propaganda poster maquette around the middle of the 20th century. It was aimed to warn the audience to defend against accidents.

The visual characteristics of the artwork suggest that it must have been created between 1945 and 1949. The reason is that this design shows the traits of the distinctive poster art of a short-lived democracy in Hungary during these years. After the World War II, the Soviet Red Army occupied the country, but the Soviets didn’t overcome the newly evolving political system. The short democratic period brought the revival of political poster art: there was a boom of propaganda posters with compact and powerful design. The most important function of them was to be easy to understand and convincing, so the designers employed well-known symbols and visual signs, but in a new context, properly to the changed political and social circumstances. The leading figure of the period was György Konecsni, the master, who influenced many others as well.

He was one of the masters of Olga Tövisváry, the creator artist of this design, as well. She went to the Academy of Applied Arts between 1945 and 1948, after which she also attended the Hungarian Academy of Fine Arts. She designed numerous movie, cultural and commercial posters for the biggest national Hungarian companies, and created the graphics of the foreign exhibitions of Hungexpo, the biggest Hungarian exhibition organizer company. Her fine graphical works showed modernist tones with an expressive character.

Here she created a concentrated composition which raises awareness with a clever idea: the design depicts only a pair of eyeglasses with one black glass and one glass which shows a nice landscape. There we can see some little hilltops with a tree on them from the distance, and some light pink flowery branches of a cherry tree at close range. Some fleecy clouds are drifting in the light blue sky peacefully. The pleasant scene visible here is in contrast with the darkness of the other lens, which emphasizes the sad reality of the experience to lose the sight of an eye. This way the artist represented the shocking consequences of an accident if one was careless or incautious. As the specific cause of the accident is not shown, because the glasses appear in front of a blue background, the viewer can imagine any kind of situation in which the tragedy can happen. Hence the message of the design has a general meaning and it can be utilized for work, home, and other safety campaigns. The typographic design is put at the top and at the bottom of the artwork, as a frame around the image, and the word ‘defend’ is stressed by the bigger and red letters used, and its positioning.

From top to bottom the background goes from light blue into dark blue gradually, still it remains an entire large, colourful area. The motif of the glasses is portrayed from an impressive angle, by which the distance between the foreground and the background is intensively highlighted. Therefore the flatness of the background is in a fascinating contrast with the three-dimensional effect of the depiction of the object. There is another interesting thing: the glasses appear with legs behind, so the scenery can be seen on the outside of it. Although in reality one would see through the other side of the glasses than the way it is captured here, that doesn’t complicate the understanding of the image. Moreover, it gives an extra touch of playfulness to the design, together with the tricky views.

The gently stylized, decorative portrayal, the soft shapes and colours bring tenderness to the design, contrary to the stark cruelty of it. The bold display setting and the sharp perspective increase the dramatic aspect further. The endless distance behind expresses the eternal value of the message, which is a mechanism, most probably, learnt from Konecsni. It derived from the metaphysical painting art of the period, and became a typical tool of the contemporary poster art in Hungary. Tövisváry not only adapted the tools and techniques of her time, but created an imaginative, original piece. Her work is an expressive and thought-provoking design.