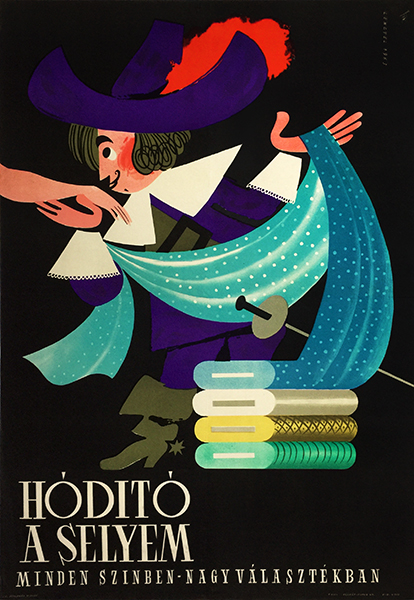 Silk production was introduced in Hungary in 1680 but it only became very popular towards the end of the 19th century. The first local silk producing company was established in 1901. Before World War I. Hungarian silk manufacturing was the 3rd in Europe and due to the demand generated by the war, production was blooming.

After losing the war and 2/3rd of the country's territory, the Hungarian workers were fired from the company and in 1931 it was closed. In 1935 the factory was bought by the wealthy Bujatti brothers and the production has started again, the company was growing giving work to many people. During World War II, silk for parachutes was produced, however towards the end of the war a part of the factory building was turned into a military hospital.

When the German army withdrew from Hungary after being defeated by the Soviets, they took all the remaining fabric with them. The money at the factory was stolen by the Soviets, according to the records written by the administrator of the company. After the war, thanks to the work of the numerous volunteers, the company managed to survive and continue production. Silk was exported to the Swiss market.The company was nationalized in 1948 as most companies in the Socialism, and from 1949 it was operated by the Ministry of Light Industry. This Ministry was established in 1949, the year when the Socialist regime completely took over and the constitution was changed. Numerous new ministries were born in this year. From the middle of the 20th century, silk production and the breeding of silkworm went through an upswing, however it didn't last long, as in the 1960s cheaper substitute materials have appeared and quickly overtook the market.

However, the information on this poster indicates that there was a great selection of silk available on the market. This contradicts the previously written facts, yet, advertisements in the socialist era often visionalized qualities that were not existing, but were more important for show. Despite the often untrue message of the posters, the artistic qualities were real.