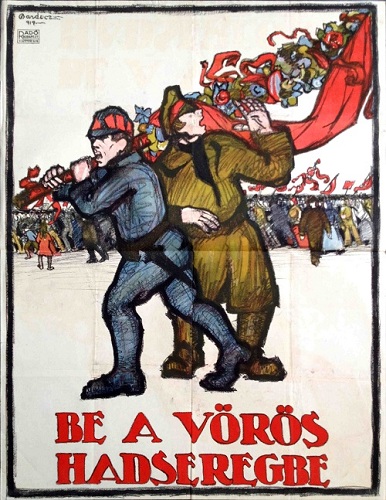 His posters show the popular Art Noveau style of the period. They are based on sophisticated, elegant drawing. Bardócz usually used flat-like shapes and decorative lines, with few intensive colors. His posters often utilize humor and caricature.

He designed many commercial posters in the 1910s. Most of them are telling funny stories, using humor as key element. On these compositions, the narrative picture is combined with nicely designed script. He prefered to use lovely women figures on the posters, mainly well dressed metropolitan ladies. Besides posters, Bardócz designed every kinds of ephemera in this decorative Art Noveau style: invitation cards, covers, illustrations, etc.

During the first world war he started to design propaganda posters for war loans and for charity campaigns. These works preserved his drawing and painting based, fluent Art Noveau style. In 1919 he created some propaganda posters for the Hungarian Soviet Republic. His recruation poster doesn't follow the modern, expressionist approach that was common among other poster artists. Bardócz remained active in the between wars period, he kept on designing decorative commercial posters.