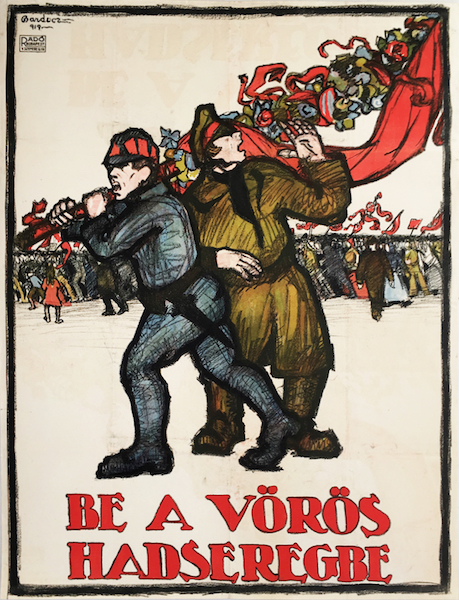 While the Hungarian Soviet Republic was a failed experiment in 1919, which brought more suffering to the already devastated Hungary, it was undoubtedly a unique attempt that brought the young, immensely talented modernist minds together, and gave them the opportunity to shine for a short while. This modern utopia soon showed its enormous flaws, but its demise was not without a trace. The most important imprints of this era are the unique and bold propaganda posters, which were supposed to convey its utopian ideas to the masses.  Education, culture and propaganda were linked together and each took part in the great work of reforming society. Posters of the Hungarian Soviet Republic show the spirit of this very short but important period.

Árpád Bardócz is primarily known for his decorative fashion commercial posters designed during the 1910s. In this fascinating poster he combined his great sense of decorativeness and the expressive dynamism of early modern propaganda. He designed many commercial posters in the 1910s. Most of them are telling funny stories, using humor as key element. During the first world war he started to design propaganda posters for war loans and for charity campaigns. These works preserved his drawing and painting based, fluent Art Noveau style. In 1919 he created some propaganda posters for the Hungarian Soviet Republic. His recruation poster doesn't follow the modern, expressionist approach that was common among other poster artists.