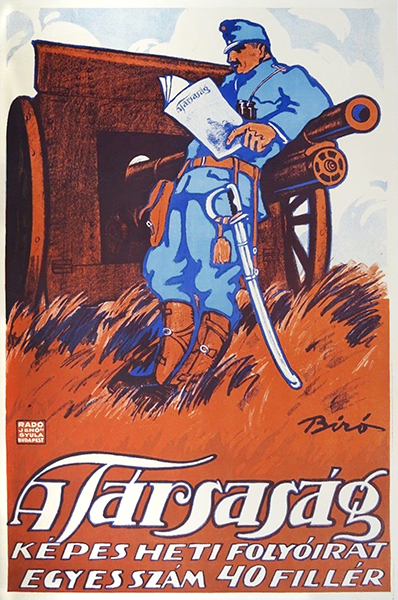 Near mint, backed on linen.

'A Társaság' (The Company) was an illustrated weekly magazine about literature and culture. The author of the poster depicted the paper in the hands of a soldier leaning on a cannon hence, despite the generic thematics of the magazine, the advertisement related to the current issues, the war. In 1914 the Great War was the major topic, the audience was very sensitive to all relevant impulses, thus it was wise from Biró to promote a cultural magazine in such context. The composition implies that even soldiers read this magazine for relaxing in the midst of fights and getting updates.

Mihály Biró is known worldwilde for creating a new genre in poster art, the political propaganda. The most widely know working class symbols are contributed to him (Red Man with the Hammer, Red Fist or the Working Class Giant). His great talent shows itself in this atypical journal advertisement as well. At the time, posters promoting newspapers were rather made in a story-telling, more playful style, but Biró brought his monumental, catching manner to these pieces as well.

In this case the soldier is depicted from below what makes him appear even bigger. Biró used  different shades of simple brown that is in contrast with the elegant pastel blue of the soldier's uniform. The balance of the colours is achieved by little details, such as the refellection of the blue on the cannon and the grass. The white highlights - the sword and the newspaper - pop out from the composition, as well as the title of the journal and the related information on the bottom. The artist intentionally led the viewer's eyes to the most important elements on the poster by using bright colours.