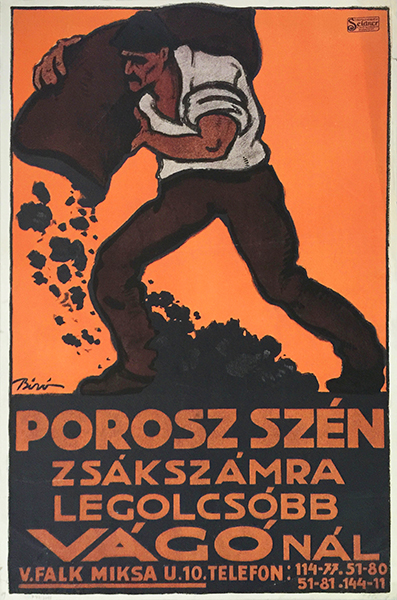 Fine, small tears, backed on linen, should be rebacked and restored.

Biró is internationally considered to be the founder of the political poster art, he is world-famous for his revolutionary designs from the 1910s. His works had great impact on the next generations of poster artists and his contemporaries all over Europe and the USA. Biró’s posters are defined by the Secessionist or Art Noveau style of the beginning of the century. His political posters are widely considered outstanding  because of their expressive power. Red and black are characteristic colours of most of his works. Biró was very versatile in his use of typography: the text on his posters often becomes an organic part of the composition. Besides political posters, he also had a lighter, humorous and decorative side, which is manifested in his commercial and theatre posters.

This poster was created to promote Prussian coal. The text says: 'Prussian coal by bags is the cheapest at Vágó. V. 10. Falk Miksa Street'.
The design is based on the robust, crooked figure of a working-class man in long trousers and a white shirt, carrying a huge bag of coal on his shoulder. The coal is depicted to be falling out of the bag to the ground. The figure of the man appears in dark, greyish colours in front of a bright orange background, which creates a beautiful contrast. The strong contour and the rough portrayal of the figure are typical of the artist. The text appears in a black panel beneath, in a colour similar to the background; although it's a bit more greyish, still remains visible and decorative. The image and text are equally important parts of the design, which contributes to the mature, harmonic composition.

This piece is a highly attractive design by Biró, from the early years of Hungarian poster art.