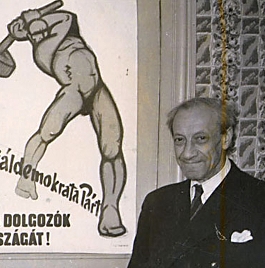 Biró is internationally considered as the founder of political poster art, he is world-famous for his revolutionary designs from the 1910s. His works had great impact on the next generations of poster artists and his contemporaries all over Europe and the USA.

His family was Jewish, his father changed the family name to Biró in 1895. Between 1904 and 1918 he studied at the Iparművészeti Iskola (School of Applied Arts) in Budapest. From 1908 to 1910 he travelled to Munich, Berlin, and finally to England, where he became a pupil of Charles Robert Ashbee, and won the award of “The Studio” magazine. This journey makes it quite possible, that he was inspired by the art of leftist German and English magazines (like Simplicissimus or Punch), however he has later created new artistic value in the field of political propaganda design. In the studio of Ashbee, Biró was definitely influenced by the English “Arts & Crafts” movement.

After arriving back to Budapest, he came in contact with the members of the Social Democratic Party in Hungary, and he became the leading graphic artist of their newspaper, Népszava (People’s Voice). During the 1910s, he produced his best work. In 1912, he designed a poster for the newspaper, which became his most famous work (known as the red man with hammer or red-hammer-wielding man). As a thoroughly convinced leftist artist, with a strong proletarian conscience, he has created the posters for the demonstrations for voting rights organized by the Social Democratic Party.

During World War One, Biró served on the Serbian front, where he got serious lounge and heart problems, which didn’t heal perfectly, and caused him health issues for the rest of his life. He was discharged from the military in 1917, and the same year he has designed an expressive cover for the famous German magazine “Das Plakat”.  Biró has produced several war posters for war loans and charity events as well.

In 1919, after the Hungarian Soviet Republic was formed, Biró became the leading propaganda artist: he created posters, festive decorations, sculptures, etc. After the fall of the short-lived soviet regime, Biró had to flee: he was invited to Berlin by dr. Hans Sachs, who was the leading poster collector and author on poster art (founder of the Das Plakat journal). Later he worked for Austrian leftist parties, and commercial companies.  In 1920, he has published his “Horthy album” about the horrors of white terror in Hungary. He also worked in Berlin, but soon he had to flee from Germany because of the Nazi threat: first to Austria, then Slovakia, and then to Paris. After the Nazi occupation of the city, he was not sent to concentration camp because of his bad physical condition. After the end of the war, in 1947, the socialist government of Hungary called him back: Biró received great honours and a villa in Buda. Because of his serious illness he was unable to accept the university position that was offered to him. He died in 1948.

Biro’s posters are defined by the secessionist or Art Noveau style of the beginning of the century. His political posters are widely considered outstanding because of their expressive power. He was able to create long-lasting, monumental symbols for political parties and ideas. He often used monumental (male) figures, which embodied a whole social class or the society itself. Biró liked to use international socialist symbols, like the red colour, the sickle and hammer etc., but he has created new symbols too, like the red clenched fist, or the red-hammer-wielding man. Red and black are the two colours that define many of his works. Biró was very versatile in his use of typography: the text on his posters often becomes an organic part of the composition.

Besides the political posters, he also had a lighter, humorous and decorative side, which is manifested in his commercial and theatre posters. Many of these posters (Palma, Unicum, Gyerünk az Edison mozgóba, Nyugat)  have the same artistic value as his best propaganda designs.       .