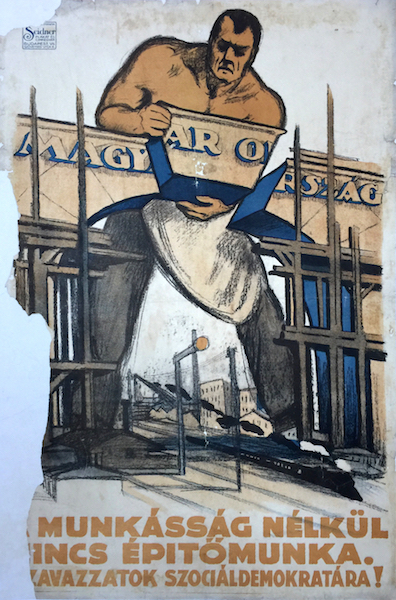 There is no construction without the working class!

The gigantic figure constructs a bridge that carries the script: "Magyarország" (Hungary). Biró intended to express the message in an understandable visual language. He was the first to use gigantic symbolic figures that incorporate a large group of people, in this case, the working class. The Social Democratic Party couldn't enter the Hungarian Parliament in the interwar period, when a conservative-nationalist party ruled, and was unchangeable.

Biró was a central figure in the Hungarian Soviet regime in 1919, thus as the regime collapsed afterwards he had to emigrate. This poster is one of the rare examples, which were designed by him in Germany, and sent back to the Hungarian printing house. Biró tried to support the Hungarian social democracy during his exile, however he didn't return to the country until 1945. This poster is an authentic memory of Hungarian history: it could be seen on the walls until somebody picked it up from the street. This caused some damages of the paper, but the poster today is in a fine, restored condition.