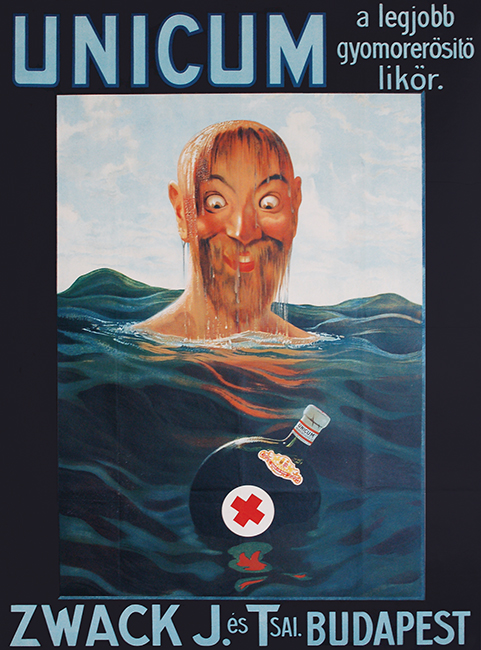 This is the most important poster in Hungarian trade and advertising history. It is by far the best-known and most celebrated Hungarian poster that was ever made. The Unicum poster is extremely rare, and out of the few that might be in existence, most probably this one is in the best condition.

Unicum is the national drink of Hungary. It’s a bitter herbal liquor which is consumed as a digestive or aperitif. The recipe was founded in 1790 by József Zwack but only for medical purposes for the Habsburg Court. Fifty years later his son established J. Zwack&Co, the very first Hungarian liquor producing company but Unicum wasn’t patented until 1883. Besides Unicum, the company produced various types of liquors. The factory was very successful but in World War II it was completely ruined and then the socialist regime nationalized it. The family fled to the USA but never gave the real Unicum recipe to the Hungarian government. Peter Zwack returned to Hungary in 1988, a year before the fall of socialism and he continued producing the original Unicum. It was back to the national market by 1990. Today the company is one of the leading distilleries in Europe and it also launched some of their products in America.

The soaking man - often referred to as the ‘fishman’ – became a symbol inseparable from the brand. The somewhat comic shipwrecked figure who falls upon his rescuer, a bottle of Unicum in the wild sea, is one of the most well-known characters of advertising history. Thanks to the decorative style of the poster, the concisely presented message and the perfectly captured moment of the story of the character, if someone saw the poster once, could never forget it. Besides the main character, the round bottle with the red cross on it also became a trademark of the brand. It was first pictured in 1894 and became know all over the world. The same design has been being used ever since – there hasn’t been a Unicum advertisement without the peculiar bottle since the beginning of the 20th century. Despite how famous this poster is, it is a very rare piece. It cannot be found in any Hungarian public collection. This is preserved in a perfect condition by the Albertina in Vienna. Before Albertina, the poster was owned by Julius Paul, one of the most important collectors of the 20th century.

The poster is not signed thus we don’t know who the author was. It was attributed to Sándor Bortnyik but he could only be taking part in redesigning the label in 1922, as he was very young when the famous Unicum design was created. The emblem being used today, the golden cross on a red background might have been the result of Bortnyik’s redesign but this poster is the earlier, original version where the bottle has the red cross on white background. This logo was present in numerous magazines since the April of 1909. This date makes us assume that the author of the design might be Viktor Pachl (1883-1977), who was the winner of a supposed national tender between 1905 and 1909, which he won and hjence was commissioned to design the Unicum poster.