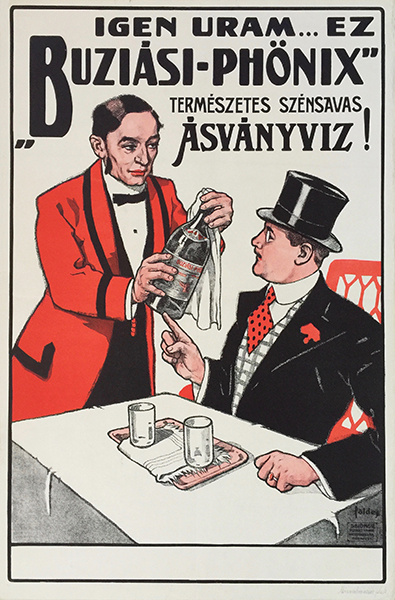 Yes Sir... This is the Buziasi-Phonix natural sparkling mineral water

Yes Sir... This is "Buziási-Phönix" natural sparkling mineral water. This fantastic poster by Imre Földes showcases his many talents. It is a great example of his exceptional drawing skills and compositional genius. The advertised product is captured in a moment where the customer asks for it. The artist uses only two colours to create this wonderful detailed design, that is also a true artifact of the history of gastronomy.

Buziás is a town in Transylvania (Romania), in the Timisoara district, which always has been famous for its natural mineral water. A thermal bath opened in the 19th century and as a result Buziás became a tourist destination. In 1903 Jakab Muschong, a wealthy business magnate bought the area and he ordered test drillings. A rich spring with salty and carbonated water was discovered which could efficiently cure patients with dyspepsia and gout. The place hence became frequented by tourists and patients, and soon a whole complex was built with spas and hotels. In 1907 Muschong started to produce bottled mineral water, to which he gave the name “Phönix” that became a famous brand. The company was also working for export. In 1908 Buziási Phönix mineral water won first prize at the National Exhibition in Bratislava. Until 1948 the factory remained in the hand of the Muschong family. By then it was managed by Jakab’s daughters, when the company was nationalized. From the 1990s the company was reorganized and today it is a private firm again, still working under the trademark “Phönix”.

The mineral water was produced iron-free and with natural carbon. There are numerous springs in the area, but most of the water comes from the two main springs, called Michael and Joseph. On the original label of the bottle (appearing on Földes’ poster) a beautiful swimming girl who reaches out from the water to a bottle on rock is apparent. The crest of the city Buziás appears on the rock also. (The motive of the label also appeared on an old poster). The „Buziási Phönix” water changed its label in 1920. After the Trianon Peace Treaty Transylvania and the city of Buziás has become part of Romania. Therefore the company changed the label on the bottles to a new design with a Romanian text. Considering this, it is obvious that Földes’ poster was created before 1920, since it represents the old label on the bottle. In the 1920s the company still followed the narrative late Art-Nouveau style that appeared on Földes’ poster prior to the war. One advertisement shows a very similar scene with the waiter, who accidentally splashes the water in the face of the customer.

The famous Hungarian poster artist, Imre Földes left the country after 1920. After that he settled in Temesvár (Timisoara), in Transylvania, where he was working for a periodical “Helikon”. It is an interesting coincidence that Buziás, the town of the advertised product lies 33 kilometers away from Temesvár. The poster was printed at the most prominent Printing Company of Budapest in the 1910s, the Seidner Plakát- és Címkegyár (Seidner Poster and Label Factory). The factory existed between 1903 and 1948 and was based in Vörösmarty street in Budapest. In 1910 Seidner opened a new institute for chromolithography (colored lithography) in the Szövetség street in Budapest, this poster was probably printed there.