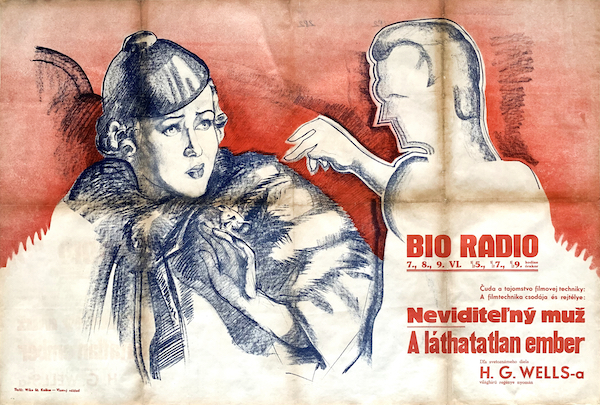 Fine, restored tears, discolouration, fold marks, pencil writing and stamps on the back.

The Invisible Man is a 1933 American science fiction horror film directed by James Whale. Based on H. G. Wells' 1897 The Invisible Man and produced by Universal Pictures, the film stars Claude Rains, Gloria Stuart, and William Harrigan. The film involves a Dr. Jack Griffin (Rains) who is covered in bandages and has his eyes obscured by dark glasses, the result of a secret experiment that makes him invisible, taking lodging in the village of Iping. Never leaving his quarters, the stranger demands that the staff leave him completely alone until his landlady discovers he is invisible. Griffin returns to the laboratory of his mentor, Dr. Cranley (Henry Travers), where he reveals his secret to Dr. Kemp (William Harrigan) and former fiancée Flora Cranley (Gloria Stuart) who soon learn that Griffin's discovery has driven him insane, leading him to prove his superiority over other people by performing harmless pranks at first and eventually turning to murder.

The Invisible Man was in development for Universal as early as 1931 when Richard L. Schayer and Robert Florey suggested that Wells' novel would make a good follow-up to the studio's horror film hit Dracula. Universal opted to make Frankenstein in 1931 instead. This led to several screenplay adaptions being written and a number of potential directors including Florey, E.A. Dupont, Cyril Gardner, and screenwriters John L. Balderston, Preston Sturges, and Garrett Fort all signing on to develop the project intending it to be a film for Boris Karloff. Following Whale's work on The Old Dark House and The Kiss Before the Mirror, Whale signed on and his screenwriting colleague R.C. Sherriff developed a script in London. Production began in June 1933 and ended in August with two months of special effects work done following the end of filming.

On the film's release in 1933, it was a great financial success for Universal and received strong reviews from several trade publications, including The New York Times, which placed it among their Best in Film for the year 1933. The film spawned several sequels that were relatively unrelated to the original film in the 1940s and a remake in 2020. The film continued to receive praise on re-evaluations by critics such as Carlos Clarens, Jack Sullivan, and Kim Newman, as well as being listed as one of their favorite genre films by filmmakers John Carpenter, Joe Dante, and Ray Harryhausen. In 2008, The Invisible Man was selected for the United States National Film Registry by the Library of Congress as being "culturally, historically, or aesthetically significant".

The Invisible Man is a science fiction novel by H. G. Wells. Originally serialized in Pearson's Weekly in 1897, it was published as a novel the same year. The Invisible Man to whom the title refers is Griffin, a scientist who has devoted himself to research into optics and who invents a way to change a body's refractive index to that of air so that it neither absorbs nor reflects light. He carries out this procedure on himself and renders himself invisible, but fails in his attempt to reverse it. A practitioner of random and irresponsible violence, Griffin has become an iconic character in horror fiction. While its predecessors, The Time Machine and The Island of Doctor Moreau, were written using first-person narrators, Wells adopts a third-person objective point of view in The Invisible Man. The novel is considered influential, and helped establish Wells as the "father of science fiction".

Uzhhorod, historically known as Ungvár is a city and municipality on the river Uzh in western Ukraine, at the border with Slovakia and near the border with Hungary. During the past century, the city was part of Hungary, Czechoslovakia, Hungary again, and Ukraine. Bio Radio was the cinema of Ungvár.