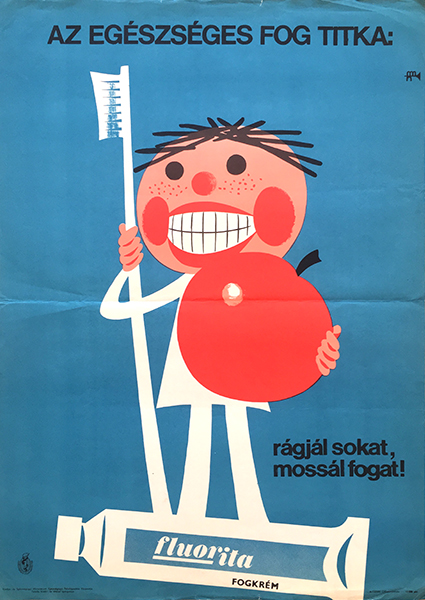 The secret to healthy teeth - Chew a lot and brush your teeth!

Fine, fold marks, creases and tears along the border.

Propaganda poster of the Ministry of Health Care. Its goal was to draw people's attention to the importance to keep their teeth healthy.

In the Socialist era the government put a high emphasis on health propaganda. Many posters aimed at raising awareness of keeping themselves and their environment clean. This particular piece is a fine example of such posters. A cute boy is standing in front of a turquoise background, where the colour itself projects cleanliness. He holds a toothbrush and an apple in his hands and the slogan says: '...chew a lot and brush your teeth!'

Interestingly enough, although the poster was ordered by the Ministry of Health Care, therefore it was not a commercial advertisment, a then existing toothepaste brand, Fluorita, is apparent on it. Probably there was no intention of advertising a certain brand within the frames of health propaganda. It is more likely that since in the Socialist times there wasn't such a great variety of goods, the artist picked one brand which sounded familiar to people so they immediately associated it with brushing their teeth.