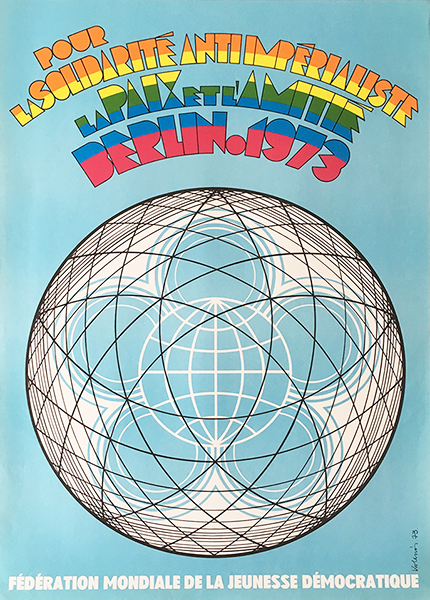 For the anti-Imperialist solidarity - Peace and Friendship - Berlin 1973

Original vintage event poster by Erzsebet Koleszar from 1973. The poster was designed by a Hungarian artist for a foreign event, hence the French text.

For the anti-Imperialist solidarity was the motto of the 1973 event of the World Festival of Youth and Students.

"The World Festival of Youth and Students is an international event, organized by the World Federation of Democratic Youth (WFDY), a United Nations-recognized international youth non-governmental organization, jointly with the International Union of Students since 1947. The festival has been held regularly since 1947 as an event of global youth solidarity for democracy and against war and imperialism. The largest festival was the 6th, held in 1957 in Moscow, when 34,000 young people from 131 countries attended the event. This festival also marked the international debut of the song "Moscow Nights", which subsequently went on to become perhaps the most widely recognized Russian song in the world. Until the 19th festival in Sochi, Russia in 2017 (with 185 countries participating), the largest festival by number of countries with participants was the 13th, held in 1989 in Pyongyang when 177 countries attended the event.

The World Federation of Democratic Youth was founded to bring together young people of both the socialist and capitalist countries to promote peaceful cooperation and mutual rejection of war. However, with the onset of the Cold War soon after, the organization and the festivals became a matter of contention within the rivalry. Because of the enormous expenditure and coordination required to support a youth festival, most of the early festivals were held in cities in the socialist countries of Europe. However, many festivals, both then and more so since, have been held in non-socialist countries, affirming the commitment to peaceful coexistence between the peoples living under the different systems. The most recent festival took place in Sochi, Russia, from 13 to 22 October 2017 (source: wikipedia.org).