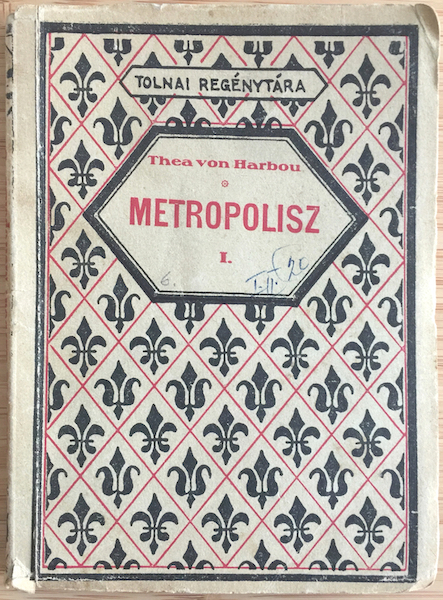 Scarce first Hungarian edition of the German screenwriter, Thea von Harbou’s novel on which Fritz Lang’s 1927 iconic movie is based.

Metropolis is a 1927 German expressionist science-fiction drama film directed by Fritz Lang. Written by Thea von Harbou in collaboration with Lang, it stars Gustav Fröhlich, Alfred Abel, Rudolf Klein-Rogge and Brigitte Helm. Erich Pommer produced it in the Babelsberg Studios for Universum Film A.G. (Ufa). The silent film is regarded as a pioneering science-fiction movie, being among the first feature-length movies of that genre. Filming took place over 17 months in 1925–26 at a cost of more than five million Reichsmarks.

Made in Germany during the Weimar Period, Metropolis is set in a futuristic urban dystopia and follows the attempts of Freder, the wealthy son of the city master, and Maria, a saintly figure to the workers, to overcome the vast gulf separating the classes in their city and bring the workers together with Joh Fredersen, the city master. The film's message is encompassed in the final inter-title: "The Mediator Between the Head and the Hands Must Be the Heart".