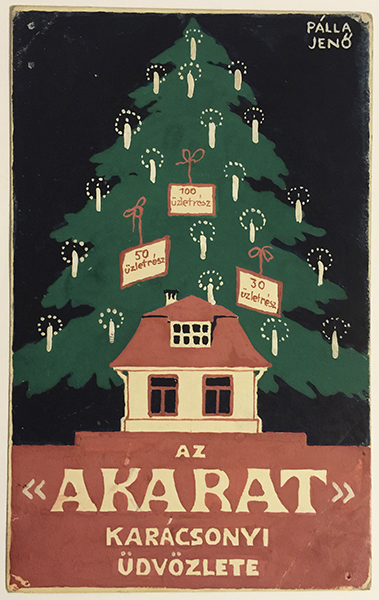 Holiday greetings of Akarat (Will)

The artwork visible here can also take you back to that time. It is almost a century-old painted artwork from Hungary, created by Jenő Pálla. Pálla was a painter of the time, who created oil on canvas paintings about natural and rural landscapes in a realist style. His works were exhibited in the Art Gallery of Hungary and the National Salon.

This work, however, was a maquette for possibly a commercial or a postcard, as the “Holiday Greetings of Akarat” inscription suggests. Applied graphics became a new, independent genre in the 1910s, so from then on, packaging designs were created by noted artists to exploit another opportunity to advertise the company.

‘Akarat’ was a store which probably also made a commission for a Christmas campaign to popularize itself. That’s why the artwork shows the small-scale store building in front of a huge Christmas tree with candles and little hanging boards on it which read ‘100 business shares’, ’50 business shares’, ’30 business shares’. The background is homogenously black and the title appears at the bottom in beige letters in a brick-red panel, in harmony with the colours of the building and the little hanging boards above. The portrayal of the artwork is typical of the period, as it bears the characteristics of Art Nouveau, the most important artistic tendency of the turn of the century and the first decades of the 20th century. Thus the artwork evokes the atmosphere of the era.