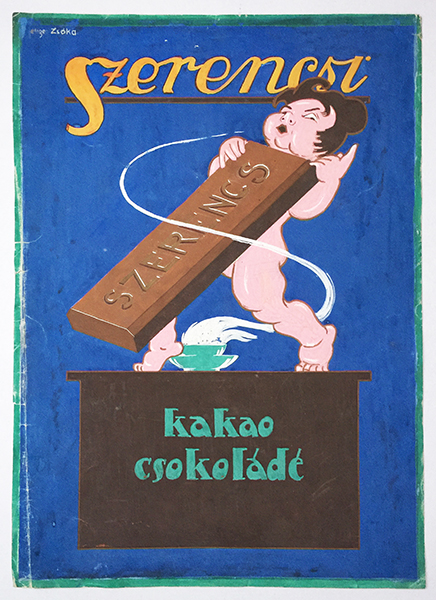 This small and decorative original poster artwork was made for a poster tender of the Szerencsi Cocoa and Chocolate Company in the 1920s.

The brand has long traditions in chocolate-producing in Hungary. After the WWI there was a fortunate situation in the field of confectionery industry as the competition of Austrian and Czech chocolate companies ended for Hungary. Those some companies which could survive until then joined their forces and they established the Szerencsi Cocoa and Chocolate factory in 1921 which started to produce in 1923. At the beginning the factory was producing chocolate only for baking, then they developed a milk chocolate in 1927 (which is known today as Boci), and in 1928 they came out with the well known cocoa powder of which the package displays a white cat. Until the WWII the company had the biggest factory in the confectionery industry of Hungary.

The poster artwork was probably made in the beginnings of the 1920s. It follows the Art Nouveau style which was the main tendency in Hungarian poster design from the 1910s.

The poster tender which the artwork was created for was probably aimed to find the first design of the company. Tenders were popular in the period as companies could choose from several poster artworks to find the visual design which reflects their brand identity the most appropriately. This poster artwork with a blue background is a good example of the commercial posters of the era. The composition is decorative and concentrated. It presents the two main products of the company: cocoa and chocolate. The name of the brand and the chocolate bar is more highlighted than the cup of cocoa in the composition and there is an interesting element: a funny putto is holding the huge chocolate bar. This figure can be often seen in the commercial posters of the period contributing to a fresher, more humorous character.

There is another poster artwork in our collection which was created for the same tender and is based on similar elements of the composition, but it has a more old-fashioned and elegant character, rather reflecting prestige and elegance. It is possible that both of these poster artworks were created by the same artist due to the similarities of composition and portrayal.

Both works are fine examples of early Hungarian commercial posters and they also function as historic relics of the early ages of Hungarian industry.