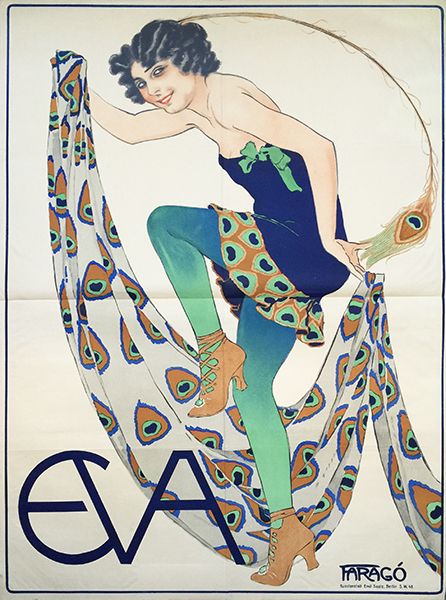 One of the most fascinating early Hungarian Art Deco posters. Its creation dates back to the 1910s, when it was designed by Géza Faragó. It is connected to interesting issues of the history of the beginning of the 20th century.

Géza Faragó was one of the earliest masters of Hungarian poster art. He was working in a textile factory to afford his art studies, when he won scholarship to Paris in 1989. He continued his work and studies in the cultural metropolis, first he studied at the Colarossi Academy, later in the Atelier Artistique Delaye. At the École des Arts Decoratifs he got to Alphonse Mucha’s workshop, after which he could work with the Czech master of Art Nouveau for two years. He returned to Hungary in 1902 and he was continually taking part in exhibitions with his gouaches from 1903 until 1910. These works were mostly “caricature-paintings” which depicted typical figures of the contemporary citylife in a satirical way. This satirical attitude was one of the most significant features of his works from the very beginnings until the end.

His early posters from the first years of the 20th century are characterised by strong and waving contour lines, vivid colours and decorative ornamental patterns. He was influenced by Mucha, but the fabular lira of the Czech master hardly appeared in the works of Faragó.  The Japanese woodcut art and the French Nabis artists also had an important impact on him. He could find his own visual voice in the Art Nouveau style within some years, by the end of the 1910s. Softer colours, more complicated dimensional compositions, decorative motifs and the persistent humorous approach became the most important characteristics of his unique style. His posters could capture the attention of the audience with their jocular scenes, clever ideas and high attractiveness.

This poster is one of his later works. It depicts an engaging figure of a lady dancing in colourful, fashionable clothing and smiling to the viewer. The figure is picked out of scene and put in front of a white background, but in this dance pose and decorative clothing she is interesting enough alone. She is wearing a dark blue, strapless tank dress with a green bow at the top on one side and camel-coloured frills at the bottom with blue and green patterns. The waistline disappeared in the dress and the hemline has climbed high letting the legs be seen in the turquoise stockings. The camel-coloured high-heel shoes with laces are also showy as she is standing on one foot, lifting the other one up. She is also holding a long, white stole with pavonine patterns in her hands outstretched. A real feather of a peacock is hanging out of her short and curly bob hairdo as its ornament. Only the name of the lady, ‘EVA’ appears as the inscription at the bottom of the composition.

The female figure was one of the central motifs of cultural and commercial posters since the turn of the century, which had its sources in the painting, sculpture art and literature of the age, namely the Symbolist fine arts. Several female figure types were being formed, such as “the innocent, pure girl”, “the unapproachable goddess, the muse” or the “femme fatale”. As they were tools to capture and express the morale of the critical times (end of the world-atmosphere, desired harmony, cult of fate), these types became recurring motifs. Still, artists represented them in their own manner and from their own point of view.

Like the Czech master, Faragó also enjoyed representing female figures on his posters.  While Mucha’s figures have a milder, low-keyed eroticism, Faragó’s figures are more varied. Mucha’s sweet, gentle female figures can be seen on Faragó’s early posters, but there was another category, too: different from the mentioned types, it was a rather flirty, alluring kind. It appeared specifically on the posters of Jules Chéret before, in the shape of a figure drawn after a dancer or a model in fashionable, luscious clothes and in seductive dance poses. After the French poster artist, the type was named “chérette”. It was a popular type in France, but not that commonly used in Hungarian poster art. Faragó uniquely utilized this kind of representation quite often, though; this poster also belongs to the category. The “chérette” or more generally called “coquette” already appeared on the early works of him, but in the second part of the 1900s the artist gained an even bigger popularity with it. It represented a special mixture of romanticism, eroticism and social satire. Usually he employed the type in a caricaturistic character, always highlighting an aspect of it to achieve funny, catchy commercials, mostly for cultural events. The figure type reappeared in commercials for the entertainment industry in the second part of the 1910s as well, mostly in case of advertisements for nightlife events in casinos, venues and cabarets.

While the subject of commercial posters of the 1900s was rather the commerce itself, the posters of the 1910s were designed to advertise bars, restaurants, cafés, nightlife locations, and their events. These venues had been spreading the capital city of Budapest gradually since the Millennium festivities in 1896. The bohemian nightlife of Budapest and its typical aristocrat and bourgeois characters appear on the event posters of the period, many of which were designed by Faragó. A good example for that is the poster for the Carneval and violet night in Gambrinus, from 1915, and this poster with ‘EVA’ is also a perfect representative of the phenomenon. Both of the appearing female figures belong to the “coquette” representation, captured to be perky, enticing and attractive – but also with a slightly socio-critical semitone.

It is also quite interesting that Faragó was a common and familiar visitor of these nightlife events of the city, too, and several times he depicted existing, well-known personalities of the period – including himself. He dared to create parodies, „tell” jokes and use irony, not even saving himself.
The depicted dancer lady, ‘EVA’, was most probably a popular dancer figure of the contemporary nightlife culture of the city. As she is in the centre of the poster, without any typical interior of a venue building in the background, this poster can be considered as one of the early „star posters”. This genre appeared in the period, commonly among film posters, contributing to the cult of the artists of the popular culture of the era.

The appearance of the lady also has a lot to say about the period. The short, strapless tank dress which hide the hipline and keep the breasts down, the visible legs in colourful stockings and the short and curly bob hairdo evoke the fashion of Art Deco. It was a popular style, mostly in applied arts in the 1920s and 1930s. It early appeared in France in the 1910s, and later had influences worldwide. Its origins were connected to the previous highly decorative style, Art Nouveau. Although both styles represented luxury and elegance, while the Art Nouveau style was characterised by delicate, waving-curving lines and ornaments, Art Deco was rather connected to an attractive, but simpler geometric design of industrial production. Faragó was the most important master of the Art Nouveau style in Hungarian poster art, but this piece is one of his late works, bearing characteristics of the Art Deco style as well. The shapes and delicate contour lines can be considered as Art Nouveau features, but the appearing fashion and the typographic design of ‘EVA’ can identify the Art Deco style. The font type used here represents the special beauty of the industrial design of the time with its contiguous, sleek geometric letters.

Without doubt, this poster is a special piece from several points of view. As a historic relic, it evokes the bohemian nightlife culture of the beginning of the century. In Hungarian poster art it is a rare, late work of such an important poster artist as Faragó. At the same time, it is an early and beautiful Art Deco piece as well, perfectly revealing the style’s connection to Art Nouveau.