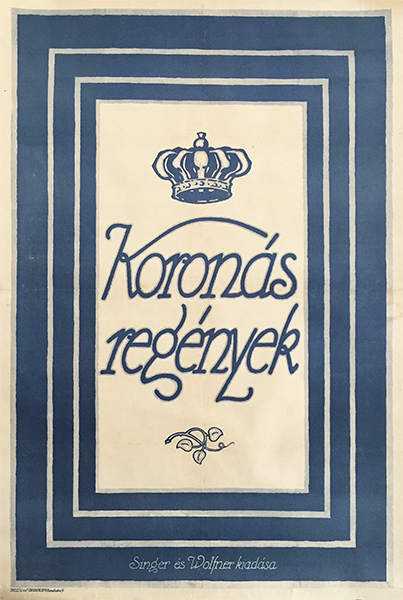 Poster for Crown Novels which was a novel series published by Singer and Wolfner Publishing House and book store. The company was founded by Sándor Singer and József Wolfner in 1885 and it soon became one of the most successful publishing companies of the time. Their success was mainly due to the idea of focusing on books for the younger generation and also offering affordable novels for the population with a lower budget. Unlike other companies they paid attention to the demand and tried to satisfy the need of the people. They also supported young talents and many of them were first published by Singer and Wolfner and then became well-known authors. Such novelists were Géza Gárdonyi, Sándor Bródy or Ignotus.

Crown Novels was the name of the affordable novel series of the company. The poster is a delicate design which fits well with the attitude of the company. Singer & Wolfner always regarded all fields of art important and put high emphasis on  the illustrations, cover designs and advertisments associated with the company. The composition is very simple, displaying only the name of the advertised 'product' and the publishing house. The blue and white colours add elegance to the image and the rectangular shapes resemble books.