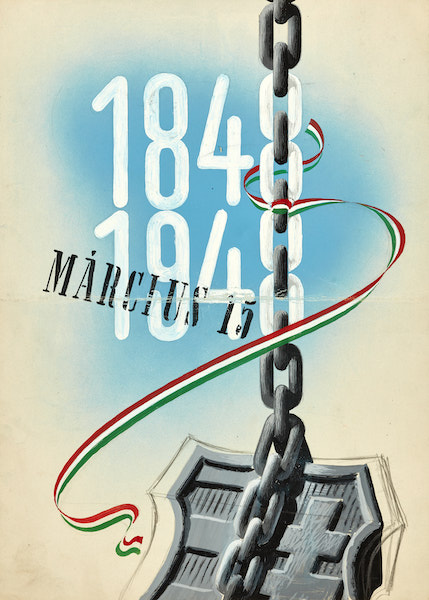 Fine, light wear, fold mark, which caused some damage to the paint.

A work designed for the centenary of the Hungarian Revolution of 1848.

The Hungarian Revolution of 1848 or fully Hungarian Civic Revolution and War of Independence of 1848–1849 (Hungarian: 1848–49-es polgári forradalom és szabadságharc) was one of many European Revolutions of 1848 and was closely linked to other revolutions of 1848 in the Habsburg areas. Although the revolution failed, it is one of the most significant events in Hungary's modern history, forming a cornerstone of modern Hungarian national identity.

After France (1791) and Belgium (1831), Hungary became the third country of Continental Europe to hold democratic elections (June, 1848), and thereafter, set up a representative type of parliament which replaced the feudal estates based parliamentary system.

The crucial turning point of events was the passing of the April laws which King Ferdinand I ratified, but later the new young Austrian monarch Franz Joseph I arbitrarily revoked it without any legal competence. This unconstitutional act irreversibly escalated the conflict between the Hungarian parliament and Franz Joseph. The new constrained Stadion Constitution of Austria, the revocation of the April laws, and the Austrian military campaign against the Kingdom of Hungary resulted in the fall of the pacifist Batthyány government (who sought agreement with the court) and led to the sudden emergence of Lajos Kossuth's followers in the parliament, who demanded the full independence of Hungary. The Austrian military intervention in the Kingdom of Hungary resulted in strong anti-Habsburg sentiment among Hungarians, thus the events in Hungary grew into a war for total independence from the Habsburg dynasty. Around 40% of the private soldiers in the Hungarian Revolutionary Army consisted of ethnic minorities of the country.

After a series of serious Austrian defeats in 1849, the Austrian Empire came close to the brink of collapse. The young emperor Franz Joseph I had to call for Russian help in the name of the Holy Alliance. Tsar Nicholas I answered, and sent a 200,000 strong army with 80,000 auxiliary forces. Finally, the joint army of Russian and Austrian forces defeated the Hungarian forces. After the restoration of Habsburg power, Hungary was placed under martial law.

The anniversary of the Revolution's outbreak, 15 March, is one of Hungary's three national holidays.