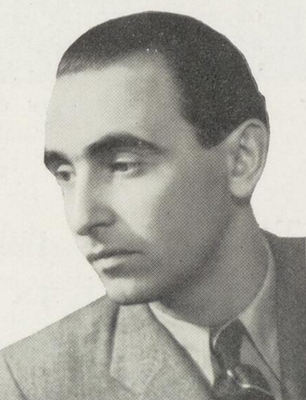 Konecsni was one of the leading poster artists in Hungary from the 1930s and onward. His classicist art deco designs first appeared on the streets in the 1930s. From 1945 to 1949, he was the engine of the development of political poster art, imbuing the genre with new quality. His work had profoundly affected generations of Hungarian poster artists. An artistic authority, Konecsni was the most important teacher of commercial graphic design.

Between 1927 and 1931, Konecsni himself studied at the Academy of Fine Arts, Budapest, where his master was the plein-air painter Gyula Rudnay. At the beginning of his career Konecsni was a committed leftist artist. In 1932, he was imprisoned for his political activity. In the 1930s and 1940s, while making mostly touris and comercial designs he introduced a new classicist style which brought him international success. He was awarded twice the Faud goblet at the International Tourism Congress (1934, 1936), the Diplome d’ Honneur at the World Exhibition of Paris, and the Grand Prix at the Milan Triennial. A pioneer of offset printing, Konecsni worked together with the company founded by György Klösz.

In 1945, the style he was using in the 1930s and 40s became the source of the new political poster design. Konecsni took a leading role on this field. He created designs for various parties, including the communists and the peasants’ party for instance. Between 1946 and 1954, Konecsni was the head of the Applied Graphics Department at the Academy of Applied Arts.

After the establishment of the new communist regime (1949), Konecsni had to work by rules of socialist realism, which for him was the denial of the main principals of poster art. As he wasn't allowed to compose the way he wanted to, he turned away from work and teaching for a while. He became disgraced after 1956 since he didn't join the ruling party (MSZMP).

During this period he was working for himself on etchings, monotypes, etc.

Konecsni became the most significant personality in graphic arts as a teacher. He also played important role in forming of the Papp-group, the leading artist group in poster design during the 1960s.

In the 1920s, the constructivist poster style touched Konecsni’s artistic world when he designed one piece of the famous “Modiano” series. In this early period, Konecsni used flat geometric forms and simple colours; yet his style soon changed, and he turned toward a more decorative and classicist artistic world. He created beautiful compositions, mainly with antique forms and soft surfaces, made by spray painting. He designed remarkable advertisements for many of the spas of Budapest, and for other tourist attractions, like Balaton, Hortobágy, etc. Konecsni also drew inspirations from folk art, which was in fashion during the interwar period due to the increasing nationalism of society. Konecsni managed to depict figures dressed in traditional clothing in a way that was acceptable also for the modern tastes. His tourism posters, for example, present national costume design in a bright harmonic world.

After 1945, Konecsni welcomed the leftist turn in the politics and became the leading artist in political propaganda. He invented a new visual language that could effectively communicate with all classes of the society. He combined clear symbols and powerful slogans, which forged a new artistic unity. He employed traditional international communist and socialist symbols - the sickle, the hammer, the colour red, the red star or flag among other symbols – placed in a new context. Most of his compositions portray the effort to rebuild the country, to get rid of the reains of fascist ideologies, and to make a fresh new start. (His most famous works from the time are "És mégis lesz kenyér", a "Kenyér itt kezdődik")