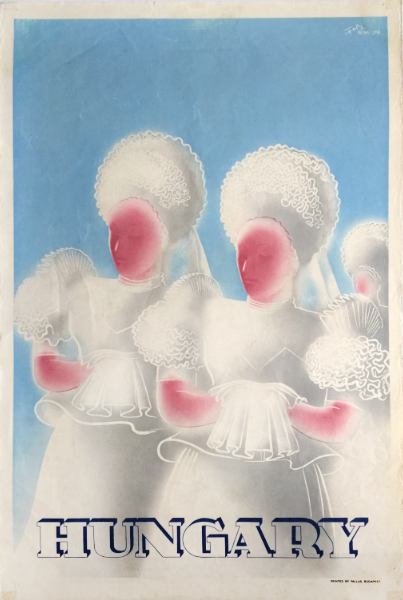 A unique and legendary travel poster from 1936, designed by György Konecsni and Antal Fery. These two artists made numerous travel posters together, but this particular one is their most interesting collaboration.

The subject here is the country itself which is a typical theme of the 1930s. It is remarkable that Hungarian tourism posters were really characteristic in the period - and for a good reason. Tourism became a significant industry in the interwar period due to changes the society had undergone - alteration of habits, availability of the modern lifestyle to wider ranges of social classes - and the technical development of the era.

Tourism of Hungary was in a terrible condition after World War I. The country lost a large amount of territories which had been attracting tourists before, and the population were more likely to go on holiday abroad, thus Hungarian tourism industry didn't have a chance to provide profit. The government soon realised the major role of Budapest, the capital city, in the local tourism, so significant steps to attract more tourists hade been made.

The development of infrastructure and the emphasised propaganda played equally important roles in the process. Numerous events were held, promotional brochures were spread inside and outside the country. The Metropolitan Tourism Office set up a new office in Vienna because experts became aware that plenty of foreign tourists travel to Vienna, but don’t go further to visit Budapest. The plan was to lure people to continue their journey by charming advertising campaign.

The poster art of the era was an important part of this tourism propaganda, countless attractive posters were created to advertise the spectacles of the Hungarian capital city, and of course, of the country itself as well. György Konecsni was one of the most important and outstanding poster designers of the era, and he was also one of the artists who formed the image of Budapest and Hungary by excellent tourism posters.

This travel poster is a fine Art Deco piece. As in case of numerous other examples of Hungarian Art Deco, the influence of folk art can easily be detected on this piece as well. The aim of this design was obviously to emphasize the country's attractiveness, and what else could be more appropriate to catch a country's atmosphere than its folk art? The highly decorative rhythm and pattern of the poster is created with ethereal women figures in their white traditional costumes. The use of paintspray made it possible to create extremely soft shades and tones. The artists employed figures without facial features which is a great tool to generalize the message of the poster. Together with the paintsprayed soft shades and bright colours, it also contributes to the etherealness of the figures which creates a special, dream-like aura of the design.

This poster is an outstanding piece by Konecsni and Fery, of Hungarian travel posters and of Hungarian poster art of the 1930s as well.