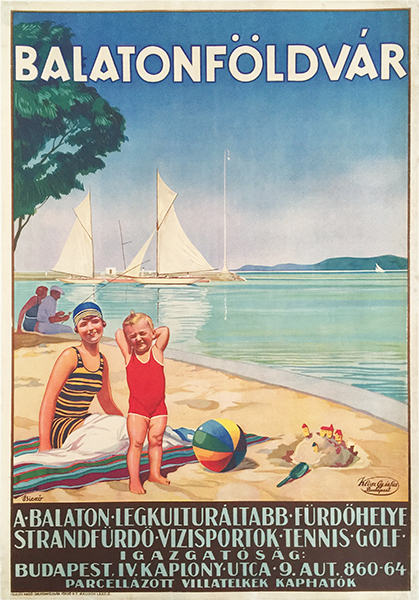 What can be better than a summer holiday when we can lie on the sun in sandy beaches and soak ourselves in cool and smooth water? Supposedly few would say anything. It wasn’t different in the last century neither, as this original vintage travel poster proves. It was created around 1930 to advertise Balatonföldvár, a popular holiday resort in Hungary.

Balatonföldvár is a town on the Southern shore of Balaton. Balaton is a freshwater lake in the Transdanubian region of Hungary, and the largest lake in Central Europe. The surroundings of the lake became foremost tourist destinations during the 18-19th century, but first visitors came to enjoy the mineral waters of the region, not the freshwater of the lake. It was similar in Balatonföldvár, too. The first bath houses were established in the 1820s and started to be the meeting point of the famous politicians of the era. However, upper social classes, who could afford to travel, still mostly had “chic” foreign destinations those times. The first boost of the local tourism was the establishment of a railroad from Budapest to the Balaton in 1861. At the turn of the 19th and the 20th century Balatonföldvár was already the most popular bathing-resort of all in the area with parks, villas, hotels, guest houses and holiday homes.

This poster claims about the conditions of the town in the early 1930s: ‘Balatonfoldvar – The most cultured beach resort of Lake Balaton. Lido, water sports, tennis, golf - Villa parcel plots are available’ The design depicts a delightful scene with a mother and a child figure in the sand next to the Lake Balaton. The figures wear lovely bathing suits (the female figure also has a bathing hat matching her swimming dress) and they have a colourful beach towel and beach ball. There is a sand castle next to them with little toys. Behind the figures an elderly couple is sitting at the shore and fishing in the shade of a tree, and several sailing boats can be seen at the port of the settlement. Farther, a boat is captured sailing in front of the mountain regions of the Northern shore of the lake.

The design adapts to a characteristic style of the period, Art Deco. The style affected every part of culture, and became a whole era in the Western world. It was the age of jazz music, revolutionary fashion achievements, old-timer automobiles, old-fashioned cinemas, Charlie Chaplin films, and last but not least: excitingly decorative posters!
The style originally received its name from the Decorative Arts Exposition of Paris in 1925. It became important internationally in architecture, fine and applied arts, including poster art, during the interwar period. Art Deco pieces were modern and traditional all at once with a touch of exoticism. No surprise, they were highly popular, especially in Europe and America. The most famous representative of Art Deco posters was A. M. Cassandre in France. The style was also one of the main tendencies in Hungarian poster art during the interwar period, inspiring artists like József Bottlik, Tibor Réz-Diamant or Ernő József Deutsch.

The creator of this poster, András Biczó was also a very popular poster artist of the time. His works are typical of their playfulness and humour. He captured joyous and colourful moments in a realist style to achieve insinuating advertisements. He illustrated numerous books, designed covers and created several posters in the 1920s, the 1930s, and the 1940s. He often designed folksy, detailed or decoratively stylized compositions, following the taste of the periods.

This poster is a mature work of Biczó. It is now not the humour, but the atmosphere which is distinctive. Although it was designed in a figuratively realist way, a bit of stylization was added to the portrayal to make it ideally attractive, properly to the Art Deco character. The design is colourful, but not harsh, the gentle elegance is created by the soft rhythm of colours, shapes and lines. A lot of blue shades from dark to light can be seen in the sky, the water, the stripes of the bathing suit, the beach towel and the beach ball, and the typography. Yellows, greens, browns, greys and whites are also moderate. It’s only the red of the child’s bathing suit, parallel with the red of the ball and other toys, which are vivid colour patches in the composition. This, together with the stripes of the swimsuit, the towel, the ball and the waves of the water, brings a pinch of playfulness to the design. The mild shapes are formed by delicate lines and tender transitions.

Art Deco is also well represented by the appearance of the figures. A historical period appears on the design, and a historically significant fashion. The short bob haircut of the figure is typical of the era and the adorable swimwear outfits are also characteristic of the time. The one piece swimsuit included short, wrap-over skirt for women and shorts for men.

The close-fitting cloche hat was an iconic fashion item, and the forehead was usually covered with the hat or the hair reaching to the eyebrows. These motifs can remind of the photo portraits of famous film stars like Greta Garbo, Vilma Bánky or Louise Brooks, or Tamara de Lempicka’s paintings, for example Les Amis or her iconic work, Auto-Portrait (Tamara in the Green Bugatti). A time when society changed wondrously, fashion changed the same way. More modern gender roles, beginnings of freedom and self-expression implied garcon silhouettes, glamorous dresses and graceful accessories.

It is easy to notice that the design has a remarkable photographic character. The figures are looking at the viewer and the child even blinks as if he looked into the sun. The poster was probably painted after a photo, which is also suggested by the setting itself. It is not without a reason: Art Deco poster art was influenced by photography art with its bold cut-outs, stunning perspectives and highlighted scales. Biczó also enjoyed using photographic tools to engage the audience. This poster is a perfect display of all the latter features. The emphasized straight and diagonal lines attract, lead, and soothe the gaze. Biczó’s attention to the details always made results, for example funny and charming figures like the child with the chubby thighs here.

The advertisement motivated to spend the holiday in Balatonföldvár and to buy villa parcel plots there. It must have been successful.  The settlement was improving even more during the 1930s, and it became one of the most significant tourist centres of the Southern shore of Balaton. The 6 tennis courts, the golf course, bathing facilities gave opportunities for visitors to relax or spend the holiday in an active way, while 2 casinos gave home to musical nights, galas, exhibitions and garden ceremonies. In addition, they also organised excursions, sports games and raffles to make entertainment life completed. The local newspaper was informing about greater and greater numbers of visitors. Even Duke Pál Eszterházy and Count Andrássy, and a huge number of foreigners were among them. However, the biggest news happened on 17, July 1935:

“The fashionable European summer-resorts are competing to make the Duke of Windsor spend only one hour there. Holiday resorts of Balaton, even if they ever have thought about it, it was an unattainable dream. That, what is now coming true: the Duke of Windsor, the former English king, is coming to Földvár for about 14 days with his wife... The reconstruction of his suite has already been finished. A luxurious bathroom was also built into the suite. The golf course is ready, too. The Földvár Yacht Club has reserved the best luxurious yacht for the ducal couple. ...All the rooms of the Fürdő Joint Stock Company have been reserved, and the biggest proportion of guests are well-born Englishmen.”

The 1930s was a decade of a flourishing culture. As it was made visible by this original travel poster of the time, the elegant world of Art Deco answered the needs of the upper social classes, but it had a dominant cultural influence worldwide as well. On one hand, this Biczó-work is a precious historic relic, connected to complex issues. On the other hand, it is a highly decorative piece of art as well as being a perfect representative of the fine travel posters of the age.