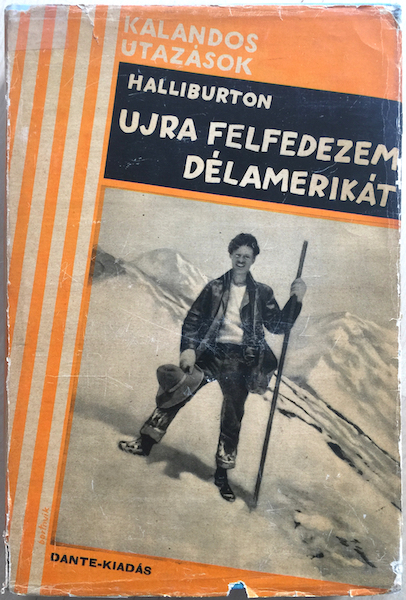 Richard Halliburton: New Worlds to Conquer is a 1932 vintage Hungarian book with an avant-garde dust jacket designed by Sandor Bortnyik.

The book was published in the series of travelogues by the Dante publisher, and some of the dust jackets were designed by Sándor Bortnyik, the Hungarian avant-garde graphic artist and painter.

Richard Halliburton (January 9, 1900 – presumed dead after March 24, 1939) was an American traveler, adventurer, and author. Halliburton was headline news for most of his brief career and is best known today for having swum the length of the Panama Canal and paying the lowest toll in its history—36 cents in 1928[1]. His final and fatal adventure, an attempt to sail a Chinese junk, the Sea Dragon, across the Pacific Ocean from Hong Kong to the Golden Gate International Exposition in San Francisco, made him legendary. (source: wikipedia.org)