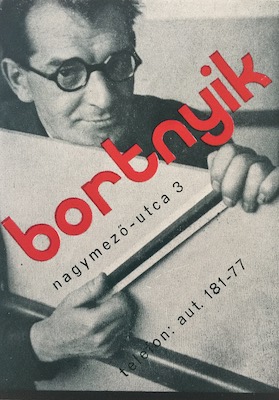 Sándor Bortnyik was one of the most important masters of Hungarian poster art. He has a great reputation as painter and poster designer as well. In the 1920s – together with Róbert Berény and Lajos Kassák – he introduced the modernist-constructivist poster style in Hungary. Bortnyik has played important role as teacher also.

Bortnyik was mostly an autodidact; he spent only two years (between 1913 and 1915) in the school of Kernstok, Vaszary and Rippl-Rónai (important postimpressionist painters of Hungary). After 1910, he startsed to design posters, and soon became a graphic designer at the Savoy Company (Hungarian cosmetic company).

In 1917, he met Lajos Kassák, and became a member of the artist group that was formed around Kassák’s avant-garde newspaper “MA” (Today).  This artist circle was heavily influenced by leftist ideologies, they were eager to transform society, meanwhile Kassák paid great attention to the development of every international (leftist) avant-garde movement (such as cubism, constructivism, expressionism), and he regularly presented the actualities of art in the issues of MA. Bortnyik’s artworks were shown at the MA exhibitions; they were also reproduced in the magazine.

In 1919, Bortnyik welcomed the new soviet regime in Hungary, and played an active role in reforming art policies. After the disintegration of the Hungarian Soviet Republic, he had to emigrate: he went to Vienna and worked along Kassák, who continued publishing MA in Vienna. He also designed book covers and newspaper illustrations. In 1921, he published an album of abstract graphic works. Kassák defined this art form as “picture-architecture” (képarchitektúra), which is considered as the Hungarian version of constructivism.  In 1922, Bortnyik left the MA group, and moved to Weimar, where he was influenced by the Bauhaus and Theo Van Doesburg. In 1922 and 1923, his works were shown in Berlin by Herwarth Walden, in his “Sturm” gallery.

In 1925, after the common amnesty, Bortnyik came back to Budapest. He organised an avant-garde theatre, called “Zöld Szamár” (Green Donkey), he continued painting, but he earned a living from poster- and commercial design works. He took this role, the “Gebrauschgraphiker” (commercial artist) very seriously, and he wrote and published extensively about it. His theoretical work, with Kassák’s, laid the foundation of modernist commercial graphic design tendencies in Hungary. He was the art director of the magazine “Új Föld”, and he was a founding member of the Hungarian Association of Book- and Commercial Artists. Between 1928 and 1938, he established and headed an art school, called “Műhely” (Workshop) that was called the Hungarian Bauhaus. He published theoretical articles in magazines, such as in Reklám-élet (Advertising Life) and in Magyar Grafika (Hungarian Graphics).  In 1933, he founded his own magazine, “Plakát” (Poster).

In 1945, he turned to political poster art (after he was restricted from anything else than commercial design). During the short democratic period (1945-49) Bortnyik was still designing posters, but these were his final years as an active poster artist. Bortnyik still played an important role in the cultural life after the communist era began in 1949: he was the editor of the magazine “Szabad Művészet” (Free Art), and a teacher at the College of Applied Arts, and then he became the director of the University of Fine Arts.

On his earliest posters, Bortnyik follows the typical decorative drawing style of the 1910s, and this characterises his World War 1 posters as well.  However, Bortnyik was open-minded for the new, modern tendencies from the very beginning, and in Kassák’s company, he got the opportunity to get to know the newest trends and art forms. His posters indicate his search for his own voice of artistic expression: some of them show the impact of the avant-garde painters’ group “Nyolcak” (The Eight), some of them are highly modern,  dynamic, expressionist artworks (like the poster for a MA exhibition from 1919).

During his years in Weimar, he was influenced by the Bauhaus and Van Doesburg, and this was a defining factor in his poster art in the 1920s and 1930s. While living in Weimar, he established an advertising studio, together with Bauhaus artists, such as Alfréd Forbáth and Max Burchartz, which was called “Neue Reklame Gestaltung”.

After his return to Hungary in 1926, his first posters soon appeared on the streets, introducing a perfectly new visual style: strict geometric forms, basic strong poster colours, block letters – and they are often humorous. This style differed from everything that the audience has ever seen, and the success lied in the force of novelty.  In the next years, this style became more and more popular, so Bortnyik worked a lot in commercial design and he has created several outstanding compositions. He became a central figure in this field: he has defined the vision of generations of young artists through his art school, his writings, and his magazine.

In 1933, he has published an article about the death of the modern poster. By that he meant the end of the modernist-constructivist poster style, since it became too familiar and boring, and because few artists were able to create truly original modernist designs of high artistic quality. Together with his colleague, Róbert Berény, they turned to a softer and more picturesque poster style. They started to use painting spray, which made their compositions soft and toned, and they started to use light colours.

In 1945, after World War 2, a new political system was formed in Hungary. Bortnyik took part in reviving the new political poster. He made poster designs about the heroic work of rebuilding the country.