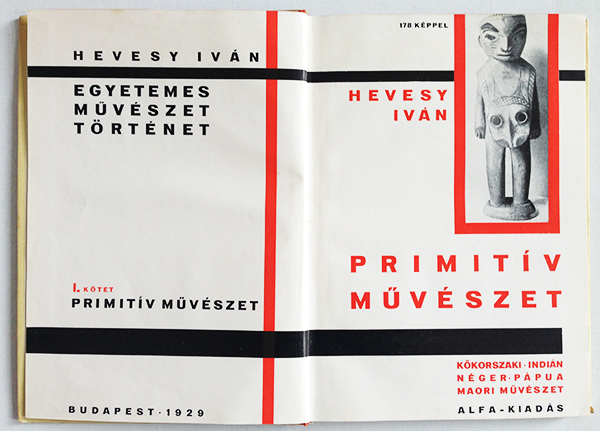 Near mint condition. Hard cover, with some stains. The inner cover and the inside of the book is in perfect condition.

The cover and the cover page of the book were designed by Sándor Bortnyik. Sándor Bortnyik was a painter and grephic designer  who was among those prominent designers (Lajos Kassák and Róbert Berény) who introduced constructivist, modern style to Hungarian graphic art. Sándor Bortnyik was one of the most important masters of Hungarian poster art spending years working with the members of the Bauhaus while living in Weimar. He has a great reputation as a painter as well as a poster designer. The black and red design with photos on the cover of this book is an impressive example of Bortnyik's constrictivist style.

Iván Hevesy - the author of the book - was a film critic and art theorist. Hevesy wrote many articles for Kassák’s famous journal "Ma". Bortnyik designed a number of covers for his books, for instance: "Millions Culture!, New Art!, Brake the Mold!" . This piece is an important constructivist work of the artist. . In the 1920s – together with Róbert Berény and Lajos Kassák – he introduced the modernist-constructivist poster style in Hungary. Bortnyik has played important role as teacher also.