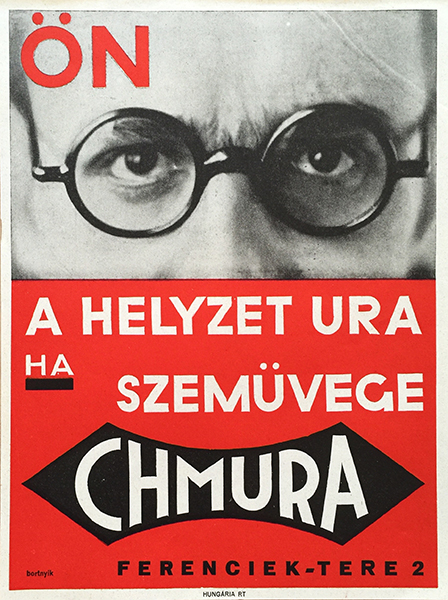 Chmura - you will be in control if you're glasses are Chmura

Constructivist tram poster for a high end glass brand of the 1930s, Chmura.

The author of the poster Sándor Bortnyik was the leading figure of modernism in Hungary, together with Lajos Kassák. At the end of the 1920s the advertising life in Budapest was restructured and, tenders were announced and the winning posters were exhibited. People realized the importance and artistic values of poster art. This was the era when modernism emerged in the country and it coexisted with another very popular, yet different style, the art deco.

This Chimura poster carries the characteristics of Bauhaus: the colours are black, red and white arranged in geometric blocks. The typography is simple, the message is compact and clear. Humour also appears on the design what was very typical of Bortnyik. The advertisement's message is told by a short rhyme that mean: you're the master of the situation if you wear Chimura (Ön a helyzet ura, ha a szemüvege Chimura). Bortnyik believed that the text is equally important in the composition, therefore should be an organic part of it. This attitude is represented very clearly on this work of his as well. The composition is a photomontage, what, according to Kassák, rooted in dadaism, but back then, the combining of elements with different emotional content served destruction. This artistic language achieved its positive meaning later with creating a theoretical content by combining different parts. This earned the place of photomontage in advertisement.