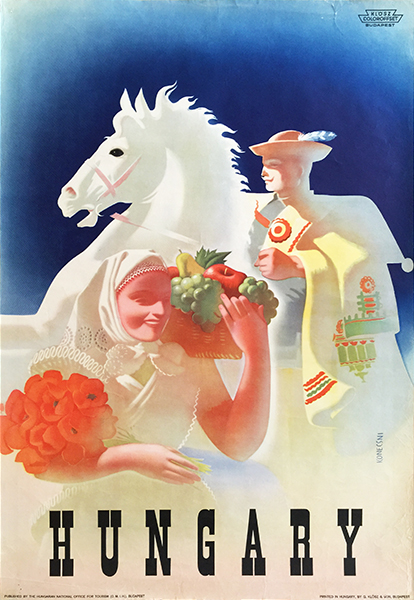 At the early stage of his career in the 1920s, the constructivist poster style touched Konecsni’s artistic world. In this period, Konecsni used flat geometric forms and simple colours; yet his style soon changed, and he turned toward a more decorative and classicist artistic world. Konecsni's spectacular art deco works appeared on the streets of Hungary in the 1930s following his graduation at the Academy of Fine Arts. He was a very influential artist who designed mostly travel and commercial posters in the 1930s and 40s. Thanks to his new classicist style he became an internationally acclaimed artist. He was awarded twice the Faud goblet at the International Tourism Congress (1934, 1936), the Diplome d’ Honneur at the World Exhibition of Paris, and the Grand Prix at the Milan Triennial. A pioneer in offset printing, Konecsni worked together with the company founded by György Klösz. He created beautiful compositions, mainly with antique forms and soft surfaces, made by spray painting. He designed remarkable advertisements for many of the spas of Budapest, and for other tourist attractions, such as Hortobágy, etc.

This poster was created in 1939 when a new important element occured in Hungarian poster art, the folklore. Thanks to the upswing of travel propaganda, Hungarian traditional clothing, ethnographic motives appeared in advertisments. As a result of the recession, the European countries put a great emphasis on tourism what had been a field operated by private companies before. In order to boost tourism, countries announced tenders and exhibitions what contributed to the making and showcasing of very high quality posters. Konecsni's travel posters played an important role in the changes of poster art in the 1930s. He started to apply painting methods in graphic design, paintspray in particular. This technique gave the compositions an ethereal and transparent atmosphere what can be obeserved on another travel poster of Konecsni as well (what he made in collaboration with Antal Fery). That poster depicts girls from Buják (a Hungarian village in the North of Hungary) in their traditional clothing. Konecsni enjoyed using the tool of chiaroscuro which is apparent on this particular 'Hungary' poster as well. The contrast creates an effect where the poster seems to be extremely radiant. His use of light resembles a photography style of the time, which depicted local sights in an idyllic, romantic style which played a big role in tourism alongside travel posters.

However, it might had been tempting for Konecsni to exaggarate the idealization and naturalism on his works, thanks to his professional attitude he avoided it in order to present work of high aesthetic values. On this poster everything has its place, and the elements of the composition are arranged in a strict diagonal, starting from the red bouquet up to the head of the wrangler. The elements falling into the diagonal line are detailed unlike the other parts of the composition, yet Konecsni managed to create a compact composition without giving the possibility to the colourful parts to be somewhat separated from the rest of the image. The warm and cold colours are perfectly balanced and that the two characters are gazing towards opposite directions contributes to the harmony of the poster.

Konecsni's travel posters were printed with offset technique in which the Klösz Coloroffset company was a pioneer in Hungary. The printing information is visible on the bottom of the poster. The same design was printed with different texts (for example Wegry and Hungary) depending on the target audience. Signed: Konecsni on the right side.