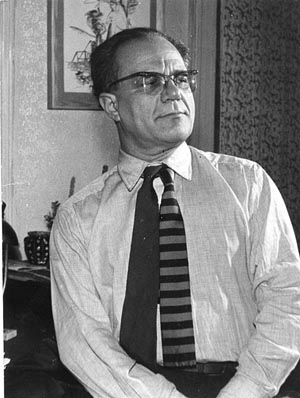 Kassowitz Felix was a famous caricaturist and graphic designer from the 1930's until the 1960's. He signed his works as "Kasso". He started his career as newspaper stenographer, then he soon changed for  illustration drawing. In the between wars period he lived in Paris as a well-known caricaturist of magazines like La Rite. In the 1930's he returned to Budapest and developed his career as graphic designer and caricaturist. He worked for famous magazines like Vasárnapi Újság (~Sunday Magazine, the most influential illustrated newspaper of the time) and for political-satirical newspapers, like Ludas Matyi. He was a pioneer of Hungarian animation film making, alongside with Gyula Macskássy and John Halas. He was in good connection with the contemporary modern artists, like Endre Bálint and Lajos Vajda. Because of his Jewish origin, he was taken to forced labor in 1943, then he was deported together with his wife. He survived the misery and after 1945 he became an even more active caricaturist. He also often designed posters, most of them advertised forms of entertainment: theatre, circus, movies etc. He was known from his very humorous attitude. Vivid colors, funny characters and humorous scenes are typical for his designs .